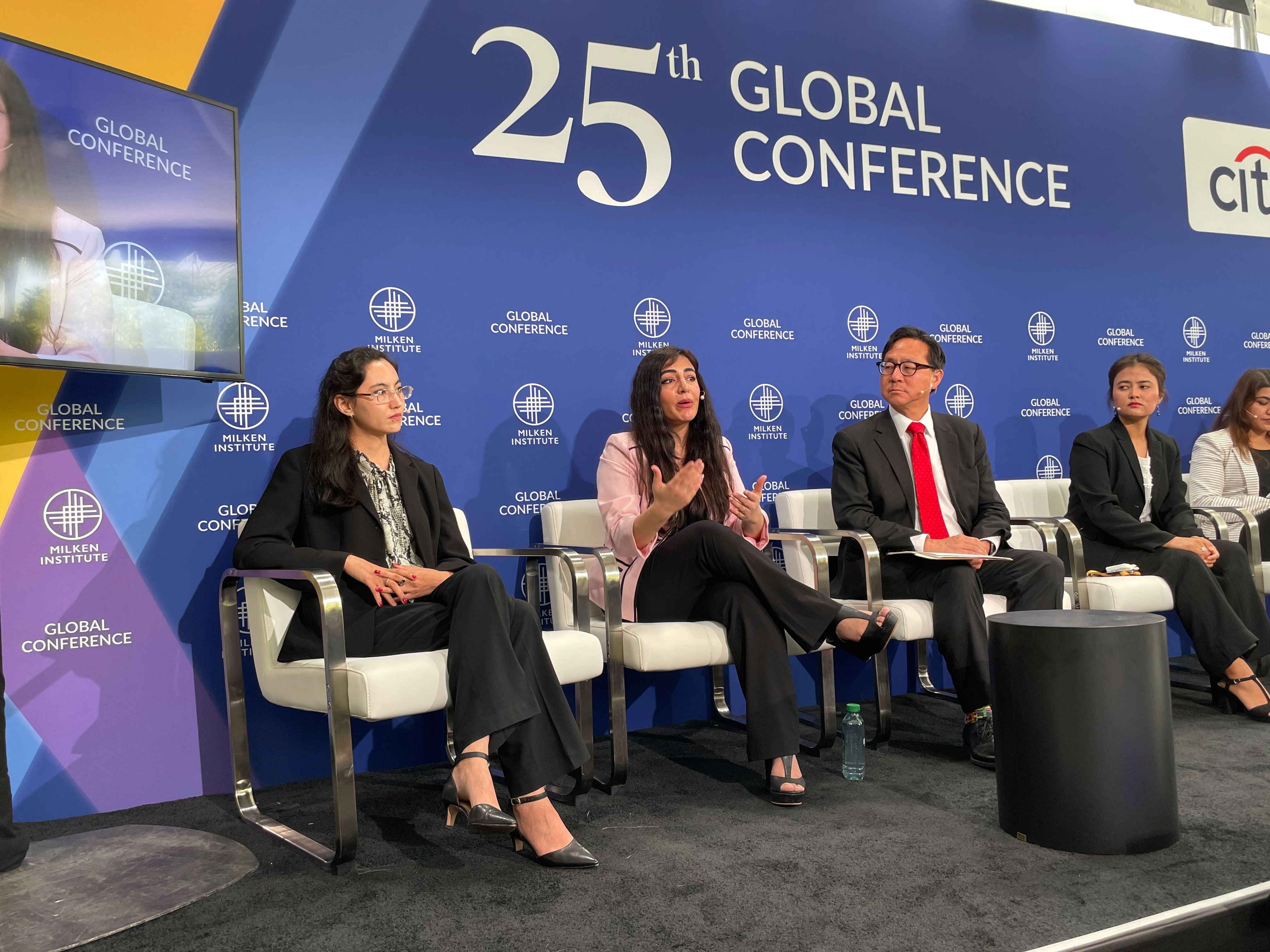 Five Arizona State University students who are refugees from Afghanistan described the difficulty of their lives right now, balancing their opportunity for a stable future with their fear for the families they left behind.

The five women, among more than 60 who came to the USS in December, months after a harrowing escape from Kabul, spoke to the Milken Institute Global Conference in Los Angeles on Wednesday. The Milken Institute, a nonprofit, nonpartisan think tank that helps people further their education and find jobs, supports ASU’s initiative to help women. The institute staff became personally involved in the situation as one of the students, Humaira Zafari, had been an intern at the institute two years ago.

The women, who were students or alumni of Asian Women’s University, are still transitioning to life at ASU, taking English classes and learning about their academic journey.

Here are excerpts from students’ remarks at the event:

Humaira Zafari holds a bachelor’s degree from Asian University for Women and will pursue a master’s degree at ASU. Photo courtesy of the Milken Institute

It was August 15, 2021, when Afghanistan’s capital collapsed and thousands of people rushed to the airport to flee the country. We knew about the Taliban and we knew their history and we knew that in the future there would be no education or career, so we wanted to leave this country.

We tried three times. The first attempt was so difficult. There were thousands of people running towards the airport. It was so chaotic, the situation.

For the second attempt, for 40 hours, we were inside seven buses. And we couldn’t get in because there were explosions near the airport, which made it harder for us to get through Taliban checkpoints.

We have not lost hope. We went there for the third time and finally succeeded.

So when the Taliban escorted us inside the terminal and handed us over to US Army soldiers, personally, I felt like a hostage in my homeland and it was so hard. What if this was the last time I saw my homeland?

Finally, on September 1, we arrive in the United States. The first few weeks were difficult. They weren’t prepared for such a large group of people. We waited in line for three hours for a meal.

Finally, despite all these challenges, we heard the good news that we all got full scholarships at 10 different universities in the United States. Fortunately, the majority of us have been accepted into ASU.

From the day we arrived, we took a placement test and we all took part in English lessons, and now we are almost done. Half of us have already graduated from these English courses. 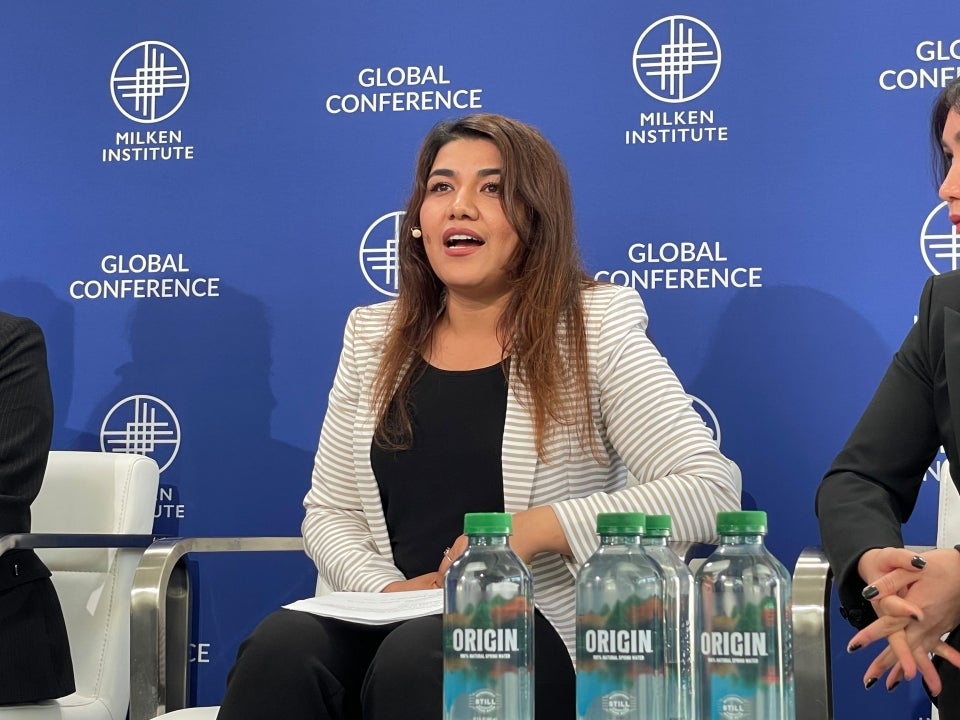 Farahnaz Walizada holds a bachelor’s degree from Asian University for Women and will be pursuing a master’s degree in global management at ASU. Photo courtesy of the Milken Institute

It was really difficult for us to leave our families behind and come to the United States alone. But we had no choice. To save ourselves, we left them behind.

They live under the Taliban regime. The sad stories you hear in the news are all true. Our families live in uncertainty and insecurity. There is a great danger for them to be there and the Taliban are threatening them because of us.

The sad news is that our sisters cannot go to school beyond primary school because the Taliban has banned schools. If girls cannot be educated, they will not have jobs, they will never have financial stability, and they will have limited options for the future. The only hope now is marriage at a young age, which will have terrible results for our sisters.

And there are financial pressures on our families. Most of the girls were the breadwinners of their families and now they are not. Most of our parents used to work for the government or international NGOs and now they are not working and they are unemployed. It is very difficult for us to support them with the limited resources we have.

We know the world’s attention has shifted from Afghanistan to another site, but we would like world leaders to know that there are 35 million people, including our beloved families, whom we have left behind us. We hope world leaders will help our families and those going through the crisis right now. 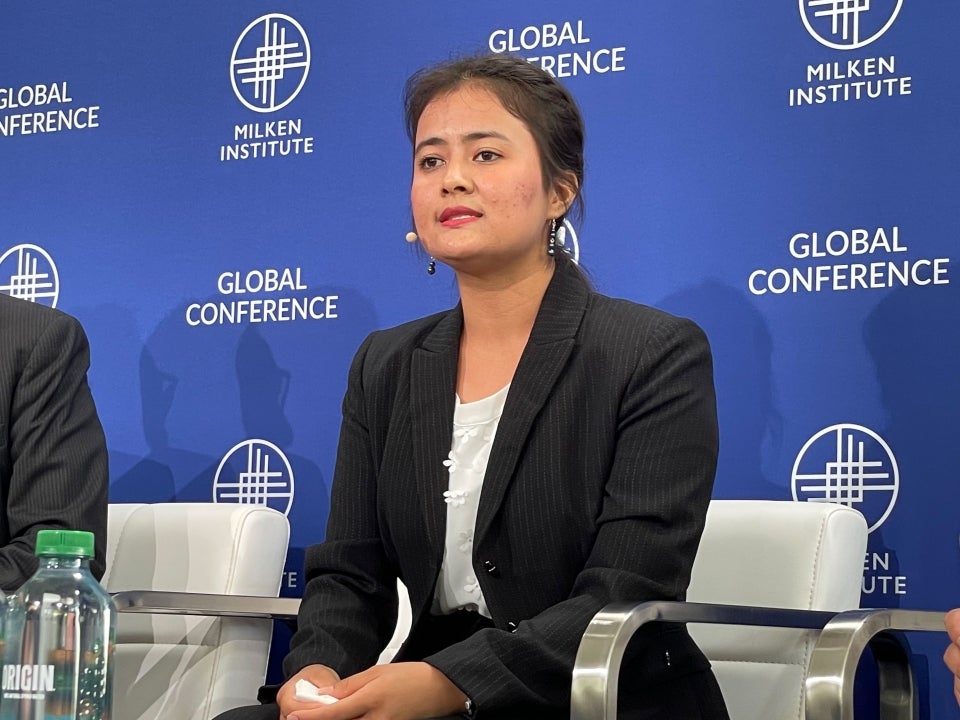 Fahima Sultani has won a full scholarship at Asian University for Women. Photo courtesy of the Milken Institute

Due to the Taliban takeover in August 2021, Afghanistan is experiencing a deadly and deepening humanitarian crisis. Literally, no one is investing in Afghanistan because everyone is afraid, because the future is uncertain.

Everyone just wants to get out of the country for a better future.

Because of this, extreme poverty continues. Early marriage can no longer be prevented because the parents cannot feed the family of seven or more.

Regarding the education crisis, qualified teachers have already left the country. As for the girls, they cannot leave their homes to pursue their studies. As for boys and men, when they go to school, explosions occur in their schools, educational centers and medical clinics.

We live in the 21st century. Education is a basic human right that has been taken away from millions of Afghan girls. 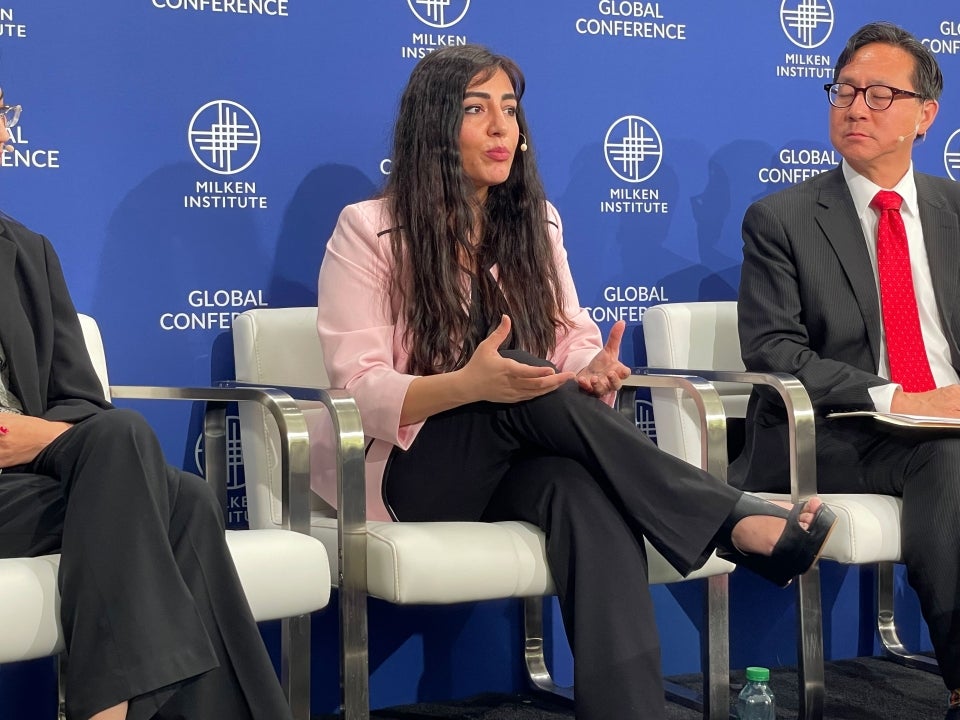 Tahmina Raoufi is an aspiring actress, a very difficult career to pursue in Afghanistan. Photo courtesy of the Milken Institute

My first memory of that day, August 15, is that I was in the office and my supervisor came running and told all the women to go home, followed by the men.

When I left, I knew something was wrong but I wasn’t sure, because at that moment nothing was certain. They asked us to immediately delete all our social media accounts and remove all political posts we had in the past, which is exactly the first thing I did.

But I feared it meant one thing: suppressing our voices.

Of course, I was desperate because I wanted the whole world to know what was happening in Afghanistan. And I wanted to know if we were left alone or if people defended us out of solidarity.

So I reconnected to my Facebook from time to time. I was afraid. I didn’t want to log in, but I also didn’t want to be silent if I had a way to communicate.

I also researched and Googled many international news agencies to see if they covered the news in Afghanistan. For a while, I felt grateful that there was some coverage of the reality on the ground, but unfortunately the world’s attention was divided.

Then came many pictures of women dressed head to toe in black hijabs, and they were shown in parliament. And suddenly a new kind of narrative was insinuating directly or indirectly that these are Afghan women and that they support this new government and this is the government they want. But this is not the case. This government came from coercion and it did not come from the choice of the people. It can therefore never represent the voice of the people.

But I would like to take a minute to acknowledge the positives that have come out of the crisis. And we are living examples of that – over 60 women who have earned full scholarships at Arizona State University.

I am a living example. When I was in Afghanistan, I wanted to become an actor and redirect my career to another field, but I did not have these opportunities. The good thing is when we got to the US and Arizona we were well taken care of, we got laptops and all kinds of tech support. We saw that there were over 1,300 majors and we could actually make decisions about our future. 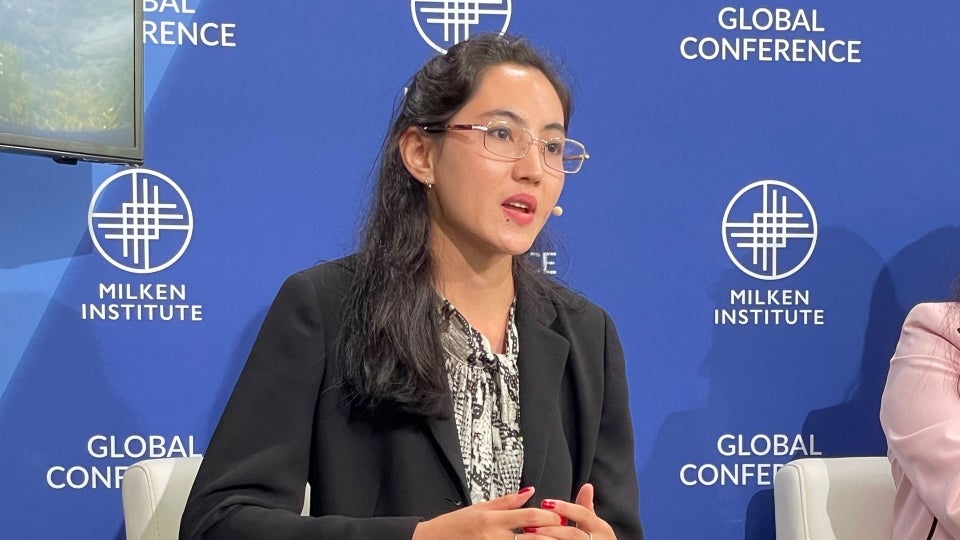 Mina Mushtaq will be pursuing a bachelor’s degree in global management at ASU. Photo courtesy of the Milken Institute

For Afghan women, education has restored their ability to work, to be self-sufficient and to pursue their dreams, but sadly, they have lost everything.

Right now, Afghan women are fighting back to restore their rights to education, work and equal opportunity. I know women who run secret schools and study groups in Afghanistan, and this is a sign of resistance to the Taliban regime and its ideology.

As a citizen of the world, I ask each of you to help Afghan women access education and put pressure on the Taliban and not recognize the Taliban as the government of Afghanistan.

What you can do for us as global citizens is to provide us with opportunities such as mentorship, scholarships and jobs. It can help us, empower us, and give us the opportunity to give back to our communities in Afghanistan as well as here in the United States and around the world.

Top image: Five ASU students described their lives as refugees from Afghanistan in a panel discussion moderated by Curtis Chin, Milken Institute Asia scholar and former U.S. Ambassador to the Asian Bank of development. Photo courtesy of the Milken Institute