Alumni and faculty tell the story and development of the WKU campus – WKUHerald.com 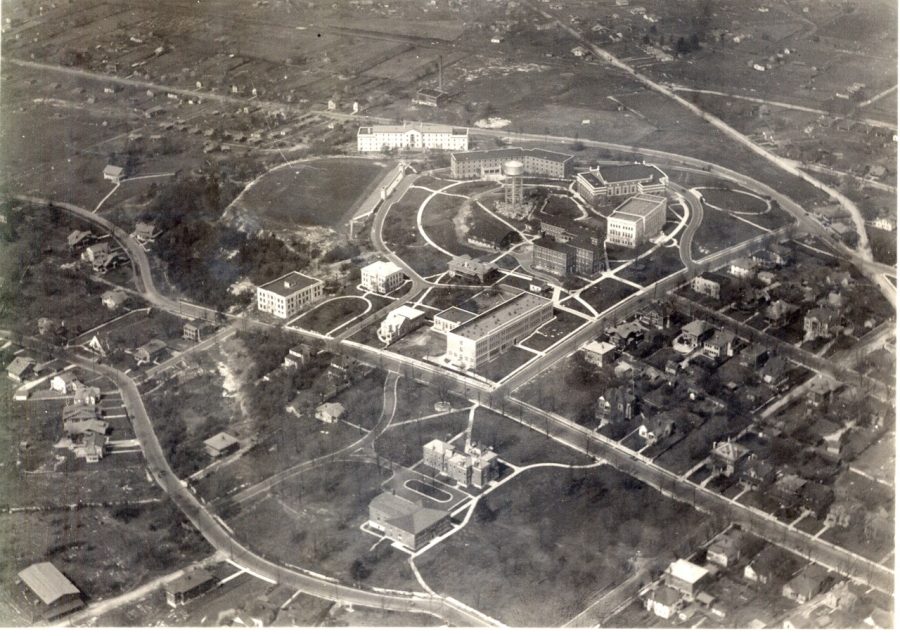 Editor’s note: An earlier version of this story incorrectly referred to Florence Schneider Hall as Snyder Hall. The Herald regrets this error.

WKU’s current master plan is not new to campus. The university has had a master plan for a long time.

“There have been master plans in place since 1906,” said John Osborne, retired vice president of Campus services and facilities, said. “It’s the evolution of a natural campus.”

WKU historian David Lee said the hill has a long history of use dating back to the 1860s.

“In a sense, the hilltop connection starts with the Civil War when the fort was built,” Lee said. “Built mostly by Union soldiers, especially an African-American artillery unit that was stationed here.”

In 1889, the Potter College for Young Ladies was built on the hill, consisting of a brick building, a recitation hall, and the president’s house. Recitation Hall stood where Cherry Hall now stands until the 1930s, Lee said.

“That was it [at the top of the Hill]”, Lee said. “The school collapsed financially in about 20 years.

Around the same time, Lee said, Western Kentucky State Normal School was being established downtown. Hardin Cherry, the first president of the WKU, then decided to move it to the top of the Hill.

“It was a very unpopular decision,” Lee said. “Cherry said he stayed on the streets of Bowling Green for a few months because he just had bad conversations about it.”

The school moved to its current location in February 1911.

“They literally picked up everything downtown and brought it here,” Lee said. “They had a team of horses that drove the library up, and they rode up State Street.”

1911 to 1937 was a period of massive construction on the Hill, Lee said. It was during this period that much of the hilltop that students know today was built.

“Van Meter was the first building built here [as part of the university], that was in 1911,” Lee said. “In 1920 Potter Hall was a female dorm and a few years later Schneider Hall was also a female dorm.”

Meanwhile, in place of the old Garrett Conference Center, stood the Red Barn. It was a facility where students played basketball until around 1931, Lee said.

“In 1931, what [students] will know that the Helm library was built,” Lee said. “It was a physical education building, and that’s where they played basketball.”

Inside that physical education building was a 5,000-seat gymnasium, basement shooting range, and band and ROTC living quarters, Lee said.

The Recitation Hall was demolished in 1937 and Cherry Hall took its place.

“There’s been an awful lot of construction in those 25 years,” Lee said.

Until the 1950s, the school was confined to the top of the Hill. Anything that might have been on the Hill was temporary, Lee said.

In the 1960s, the idea arose to construct a huge 20-story building near Cherry Hall where the offices and most of the classrooms would be kept.

“There was an idea that instead of building buildings on the Hill [the university] would build a huge structure and all the offices and all the classrooms would be in that building,” Lee said. “It would have been a nightmare, but it was approved by the Board of Regents before they decided it wouldn’t be such a good idea.”

Lee is happy to see some street renovations in WKU’s master plan.

“We’ve been trying for a long time to push traffic to the edge of campus and not so much inside campus,” Lee said. “This [WKU Master Plan] is probably another step in that direction.

Although Lee said he is not an expert in traffic and vehicle safety, he thinks it will be useful for students and the university.

“It certainly makes sense that pedestrians and vehicles aren’t the best combination, and as long as you can give everyone their own space, that’s a wise thing to do,” Lee said. “I think foot traffic is part of campus life. So I think the things that facilitate a walkable campus really work for a better learning environment.

Lee is not alone in his opinions. Distinguished Professor in the History Department, Richard Weigel, believes it is imperative for the university to adapt and renovate in order to attract more students and continue to provide quality education at WKU.

“I’ve seen a lot of change over the years, and it’s pretty amazing how it’s changed over the last few decades, but I think the university needs to keep thinking about the future and what’s going on. ‘She’s going to do to attract students,’ Weigel said.

Weigel began teaching at WKU in 1976 and became department head in 1989 for nine years before serving as acting department head of modern languages ​​for a year. In addition to being a professor of history, he was president of the faculty senate and very active in politics and with the WKU.

During his long stay on the Hill, he witnessed many changes, which he believed were generally to the benefit of the students and the university. A major change he has seen in his 45 years of teaching has been the addition of on-campus shuttles.

“One of the big changes that I saw that we didn’t have before was the shuttles going up and down the Hill and it was more difficult for people,” Weigel said. “It’s just little things like that that make big changes.”

Weigel is pleased with the current beauty of the campus.

“I really think we have a beautiful campus, there’s no doubt about that,” Weigel said. “When we have visitors and speakers from other places, they are really impressed with our campus.”

Although unfamiliar with the current master plan, Weigel is optimistic and hopeful for future changes.

“The goals behind [the Master Plan] are good,” Weigel said. “We want to continue to attract students to our campus and provide them with a good experience when they arrive on campus.”

Howard Bailey, a 1966 WKU graduate who became vice president of student affairs, witnessed myriad changes during his time on the Hill.

After a year at North Carolina State, Bailey returned to WKU as assistant dean until his promotion in 1986.

According to Bailey, one of the many changes he saw was in the level of education offered at WKU.

“I’ve seen Western grow from a regional institution to what I would call a mid-sized institution,” Bailey said. “I would say it has been the most enjoyable thing of my career; watch Western emerge from another directional institution.

Going back to when Bailey was a black college student in the 1960s, he was impressed with WKU Athletics’ emphasis on inclusion.

“[WKU] had a different flavor, mainly because of those who had a bigger vision,” Bailey said. “They were pacemakers in that they recruited and played African Americans when it was still rare.”

Bailey recalls that WKU was “thinking outside the box” during this time compared to other regional schools. The university had several African-American starters on its sports teams at a time when southern schools were still struggling with integration into sports.

“Western and Texas Western were among the rarest schools to do this,” Bailey said. “Probably the first time I noticed Western, they were playing MIT at Madison Square Garden with three or four black guys on the floor at the same time.”

Because of this kind of athletic diversity, African Americans began enrolling and transferring to college.

“In 1975, Western’s African-American enrollment was probably as large as two or three of the other schools combined,” Bailey said.

While on the Hill, Bailey also noticed a “boom” at various schools around campus.

“There was great growth in the media department,” Bailey said. “Journalism, radio, television have become remarkable departments, and again, not at the regional level but at the national level.”

John Osborne came to WKU as a student in 1968 before serving as vice president of campus services and facilities, among other positions, for more than 40 years before retiring in 2014.

“I have over half a century of campus exposure and connection,” Osborne said.

During his long relationship with the campus, Osborne has witnessed and participated in many changes.

“I’ve seen dramatic changes that have happened,” Osborne said. “I would have a hard time trying to cite many examples.”

When Osborne came to WKU as a student, DSU was not the center of campus, but rather the Garrett Conference Center, or the Garrett Student Center as it was then called.

“The center of campus revolved around this building,” he said. “It was the student center.”

One of the changes Osborne mentioned was to on-campus dining options.

“My vision, as well as the [past] The master plan was to distribute meals across campus,” Osborne said. “When I was a student, there were two places [to eat] on the campus. One was in the West Hall basement and the other was in Garrett’s.

Osborne helped put a Popeyes, which is now gone, and a Steak-n-Shake on campus. According to Osborne, this was the first location on campus for either of these restaurants in Kentucky.

Many buildings were constructed during his tenure as Director of Facilities. Osborne specifically wanted them to be built in a “traditional architecture” style.

“We said it [in the past Master Plan]“We want to expand the campus with new buildings whose architecture is reminiscent of the older buildings on campus,” Osborne said. “Look at the Gary Ransdell College of Education, doesn’t that match the architecture of the buildings on top of the hill?”

Overall, Osborne said it was difficult to point to a major change, but he said the master plan was very important for the university.

“The campus master plan is one of the most important documents an institution can develop, because without it you don’t plan properly,” Osborne said. “I am delighted that the university continues to use [the Master Plan] plan.”