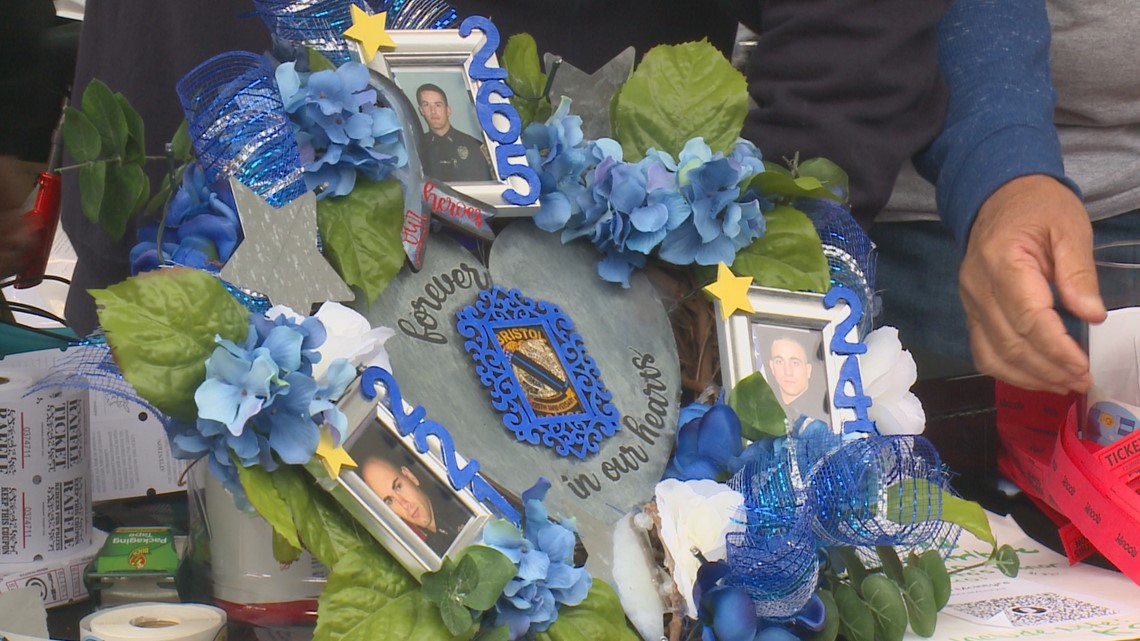 Three companies have teamed up to hold a raffle with proceeds going to the Bristol Police Department’s K9 fund in honor of officer Alec Iurato.

On October 12, Lt. Dustin DeMonte, Sgt. Alex Hamzy and officer Alec Iurato were responding to a call when they were shot in what police believe was an ambush. Officer Iurato was shot in the leg and survived while his two partners were killed.

A funeral was held for the two, both posthumously promoted, on Friday, drawing thousands from across the state and country.

Undone Salon, Sergio’s Pizza and Dunphy’s Ice Cream have teamed up to host a six-hour fundraiser with raffle prizes. All items were given away from an Xbox to gift cards to bikes. Dunphy co-owner Kevin Fuller said he wanted to do something to honor Officer Iurato, who shot and killed the suspect on Wednesday night after being shot himself.

“I thought the best way to do that would be to fundraise and then donate the money to our K9 fund because our K9 fund is self-funded,” Fuller said. “Even though my heart is broken, I know they did what they loved.”

As a former member of the Bristol Police Commission, he knew the officers. He knew the sergeant. Hamzy personally since the officer was in kindergarten.

Over 500 people showed up. Organizers say they have topped $27,000 of the $30,000 they would like to raise. Funds were also raised for the Heroes Fund which goes to the families of deceased officers.

“We have all been devastated by this tragic event, and I wanted to do what I could to support everyone,” said Bristol teacher Janice Rustico. “It’s nice to be together because it’s been a really awful time for everyone. We all have heavy hearts, and so I think it’s a little therapeutic to be together.

“We just have to stay strong and stick together,” she said.

Fuller says it was humbling to see the number of people showing up. He said the way Officer Iurato acted was “incredible” and he wanted to acknowledge it.

He said today is the beginning of healing.

“It shows that good will prevail. It shows the love of community. It shows that even through tragedy people can work together,” said Derek Jones, from Bristol. “This guy is a hero. We have to do everything we can to support him.”

Do you have a story idea or something in mind that you want to share? We want to hear from you! Email us at [email protected]

HERE ARE MORE WAYS TO GET FOX61 NEWS

Stream live on ROKU: Add the channel from the ROKU store or by searching FOX61.