Bucha survivors tell of ‘insane’ horror as they emerge from hiding 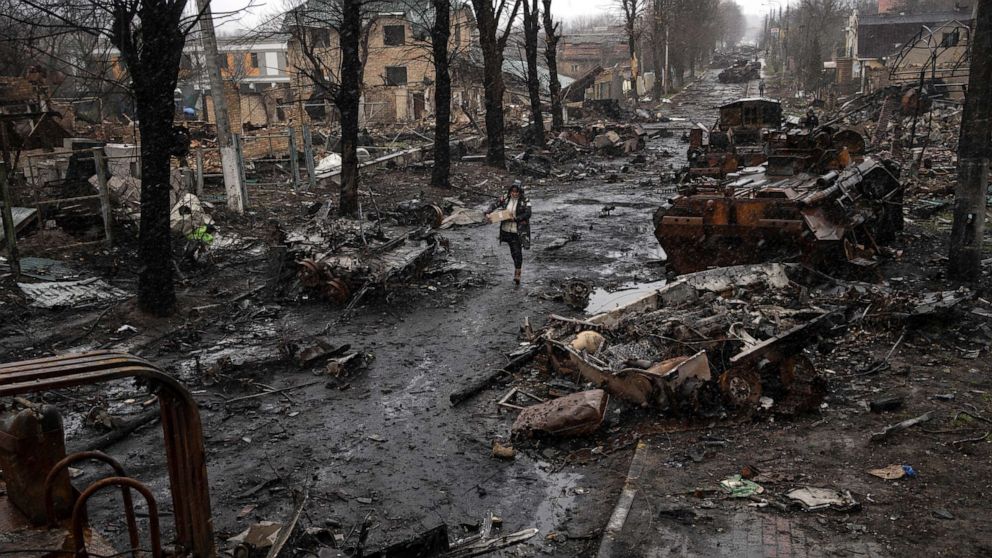 As Mykola Pavlyuk stood in front of her apartment building in Bucha, tears streamed from her eyes, streaming through the grime in her face. He was desperate to share his story, but was shaken by the trauma of it.

Pavlyuk, 53, was one of the surviving residents of the besieged Ukrainian town, northwest of Kyiv, where horrific evidence of murder and torture emerged after Russian forces withdrew. He told ABC News that when Russian troops arrived at his apartment building, they killed all the men under 50, including two friends of Pavlyuk.

Pavlyuk said he was given 20 minutes to bury them. He showed ABC News the shallow graves he hastily dug in the backyard, each marked with a wooden board and topped with a religious icon. He wanted to give them all the dignity he could.

“But it’s too superficial,” Pavlyuk said. “I just wanted to protect them from the dogs.”

Pavlyuk and other residents spoke to ABC News in the days after Russian forces left Bucha, leaving an apparent trail of death, destruction, terror and trauma that has shaken the international community. Hundreds of people were reportedly killed during the occupation. When ABC News arrived Tuesday, bodies were still lying in the streets. World leaders have called for an investigation to determine whether war crimes, including genocide, have been committed.

When Russian troops arrived in Bucha in late February, they demanded documents from everyone and forced the men to strip naked to reveal any tattoos, according to Pavlyuk. They immediately shot and killed anyone they deemed a threat, no questions asked, he said.

The mayor of the nearby village of Motyzhyn, Olga Sukhenko, and her family seem to have met the same fate. ABC News witnessed their lifeless bodies in a wooded area.

Another Bucha resident, who declined to be named, told ABC News that her husband was also forced to remove his clothes to show if he had any tattoos.

Russian soldiers took over Pavlyuk’s building, turning the homes of Ukrainian families into war dormitories for drunken and violent thugs, he said. The rooms Pavlyuk showed ABC News were littered with blankets and old food.

Pavlyuk said he and his wife had lived in the basement for more than a month with little food or water, leaving only to cook on a stove outside.

He told ABC News they face the constant fear of arbitrary murder or a random act of violence, such as when a friend was killed by a grenade he says was thrown as a joke. by a drunk soldier. The friend’s body parts lay out on the ground for days until Pavlyuk was allowed to gather them up, put them in a bag and bury them in a grave next to his other two friends, did he declare.

Other bodies were thrown into a mass grave outside a church. Residents had come out to collect some of the dead from the streets while the city was under Russian occupation. The trench was filled with bodies in black plastic bags that lay on top of other victims, who were either wrapped in sheets or nothing at all. Residents told ABC News there could be as many as 90 people buried there.

According to Ukrainian Prosecutor General Iryna Venedyktova, at least 410 civilians have been found dead in Bucha and other recently retaken towns near the Ukrainian capital, where an investigation is underway into possible war crimes committed by Russian forces. . Graphic images have emerged from Bucha showing unarmed individuals in plain clothes who appear to have been executed with their hands or legs tied, sparking outrage from the United States as well as a number of other nations and institutions.

Russia has denied responsibility, calling the footage “fake” and saying all of its units withdrew completely from Bucha around March 30. An ABC News analysis of video and satellite imagery confirms that some of the bodies seen lying in the streets of Bucha were there as early as March 19, when the city was still occupied by Russian forces, contradicting Russian claims that the scene was “staged” after his troops left.

“What we have seen so far and what we have heard from locals – what we have documented – is truly horrifying, including reports that Russian forces have taken people out of their homes, briefly interrogated and then executed,” said Richard Weir, Crisis and Conflict researcher at Human Rights Watch.

A team from the International Committee of the Red Cross was also on site in Bucha, assessing needs and delivering humanitarian aid.

“The humanitarian situation is dire,” ICRC spokeswoman Alyona Synenko told ABC News. “We have seen extremely vulnerable people – elderly people, people with reduced mobility, sick people, who are alone in their unheated apartments with no electricity, no running water, with medical needs.”

Bucha residents Tatyana Chernysh and her husband told ABC News they must have survived “by God’s will” when so many of their neighbors did not.

“At any time, the occupiers could come into our premises and do whatever they wanted with us,” said Chernysh’s husband, who said he was too scared to give his first name. “It was terrifying. It was awful.”

The couple did not leave their house while Russian troops occupied the city. They said “good people” brought them food and medicine. Although the Russian soldiers camped away from home, Chernysh and her husband said they heard incessant gunfire and stray bullets marked their home.

Since the withdrawal of Russian forces and the recent arrival of aid, Chernysh and her husband have finally come out of hiding to see what is left of their battered town. They remember seeing bodies strewn in the streets and sidewalks.

After surviving such “senseless” horror, the family said they “felt safe” and intended to stay in Bucha, despite the lack of electricity, running water and reliable communication.

“This is where we live. We don’t want to give our houses away to occupiers,” Chernysh’s husband said. “This is our city. This is our home. We will stay.”

Although he admitted that they might think twice if the Russian forces returned.

“I hope they don’t come back,” he added, “but with them you can never tell.”