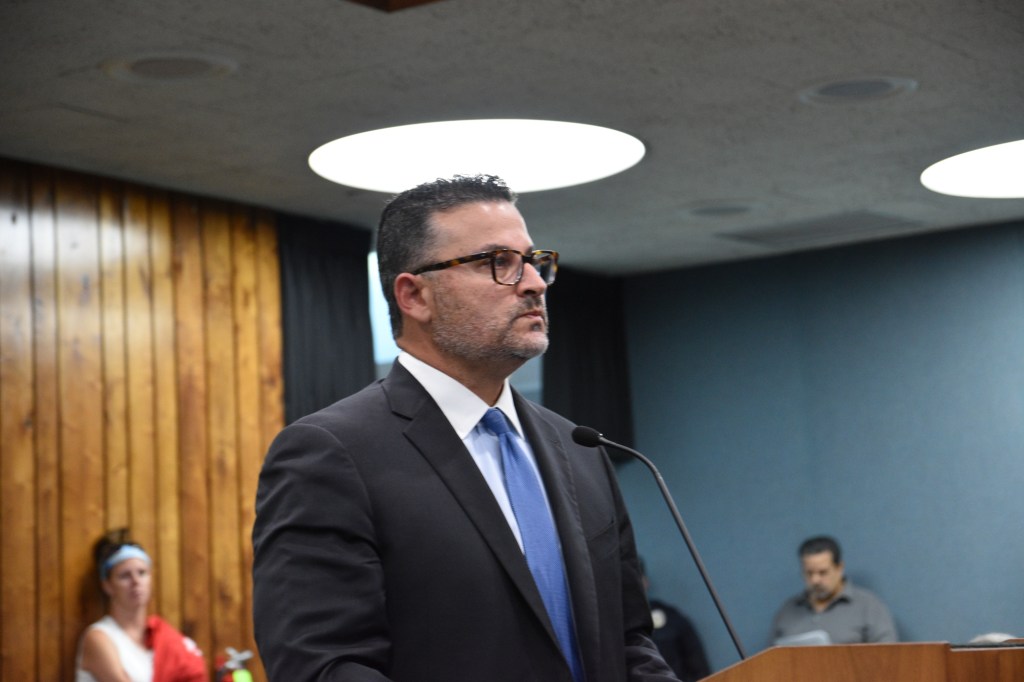 The Central Basin Municipal Water District board, known for its own scandals and constant infighting, is remarkably quiet just days after county prosecutors indicted chief executive Alex Rojas in a bribery scheme tied to his tenure as superintendent of the Bassett Unified School District.

The water board has yet to issue a statement regarding the charges and is not expected to meet again until the end of September. Only one board member returned a request for comment.

Board member Leticia Vasquez-Wilson, an outspoken critic of the chief executive, said she wasn’t sure if Alex Rojas still ran the district’s day-to-day operations. Her colleagues ignored her email requests to call a special meeting, she said.

“We have an obligation to our ratepayers and to the voters of our district to address this issue,” Vasquez-Wilson said. “These allegations are very serious.”

She is now asking the district attorney’s office to investigate Central Basin to determine if the chief executive has committed any wrongdoing in his current role. The district is a water wholesaler serving 1.6 million people in 24 cities and unincorporated areas in southeast Los Angeles County.

Lawyer: GM has board support

Craig Missakian, the attorney for Alex Rojas, said his client continued to serve as chief executive and still appeared to have the support of the board. He denied all allegations against the former superintendent and dismissed Vasquez-Wilson’s call for an investigation as a personal attack.

“Based on the good work he has done in the past, people who know him and know the quality of that work have rallied around him in support,” Missakian said. “He is certainly concerned and upset by these baseless accusations.”

Vasquez-Wilson has clashed with the chief executive and the rest of the board often in recent years. Central Basin, under Alex Rojas, sued Vasquez-Wilson in 2021 to try to stop him from using his official correspondence to speak negatively about the district, but the case was later dismissed. She is now suing the district for allegedly violating her rights by cutting her salary and shutting down her access to her district email account.

She denied having any personal animosity towards him.

The Los Angeles County District Attorney’s Office has charged Alex Rojas, 49, and Luis Rojas, 57, of construction management company Del Terra, with 12 counts of money laundering and one count of solicitation bribes and grand theft by embezzlement. Alex Rojas is also charged with three counts of perjury and one count of conflict of interest. The two men are not related.

Alex Rojas, the former superintendent of Bassett, came into the prosecutor’s sights during a separate criminal investigation into Del Terra involving allegations of campaign money laundering to Pico Rivera. In this case, Luis Rojas, CEO of Del Terra, was charged alongside the councilor of Pico Rivera, Gustavo Camacho. Investigators, while digging through bank records, identified $400,000 in payments from May 2015 to January 2017 from entities linked to Luis Rojas’ now deceased sister, Virginia Campos, to a company called Erudio Technology Solutions, which is registered in the name of Alex Rojas, then- Superintendent of Bassett Unified.

The district attorney’s office alleges the former superintendent committed perjury by failing to report consulting income on his annual financial returns in 2016, 2017 and 2018.

In an email, Missakian said Alex Rojas had provided “professional services as an independent consultant since 2012, working in public and private organizations.”

“We are still investigating how much he received as a consultant from the now deceased sister of Luis Rojas,” Missakian wrote. “But what I can say is that whatever Dr. Rojas received was appropriate in quantity and for the services rendered in good faith.”

Bassett, under Alex Rojas, approved a multimillion-dollar construction management contract with Del Terra in April 2015, about a month before prosecutors said payments from companies adjacent to Del Terra began. He continued to run the school district until he resigned in May 2017. In a controversial move, the board hired a registered consulting firm to the former superintendent at the same meeting.

A March 2019 report, written by Bassett General Counsel Francisco Leal, in response to growing concerns from the Los Angeles County Office of Education regarding issues related to Del Terra’s work in the Montebello Unified School District , alleged that Del Terra had been paid $1,037,750 for work that could not be substantiated. This is in addition to more than $4 million Del Terra received for managing a $30 million bond project for the district.

The contract was adopted by the school board in a vote on the consent schedule without any discussion, according to the minutes of the meeting.

In one instance, a subcontractor allegedly told Leal that he did a job for free that Del Terra charged the district $74,000 to complete.

In an interview, Leal said he was “absolutely convinced that a crime has been committed” based on his internal investigation.

Despite the allegations in Leal’s report, Bassett’s board later rehired Del Terra.

In a statement to parents Tuesday, Aug. 23, Bassett Superintendent Alejandro Alvarez said the district has new internal processes in place to guard against “this type of loss, harm, and abuse” and will work with prosecutors to “provide proper justice and restitution”. to the District for the harm and loss we have suffered as a community.

Missakian, attorney for Alex Rojas, alleges William Trejo, Leal’s legal partner, signed the contract with Del Terra in 2015, though Leal denies his office ever saw the contract before it was approved by the council. Neither party was able to produce a signed copy of the contract.

“Finally, just because Mr. Leal could not find the documentation supporting the invoices or that she considered it insufficient, does not mean that it is not proof of a crime” , Missakian said.

Invoices for Del Terra’s work were scrutinized and reviewed by the superintendent and business manager before finally being presented to the board, he said.

Leal’s flawed report is the backbone of the district attorney’s criminal case and related civil case, in which some of the allegations against Del Terra have already been dismissed, Missakian said.

Missakian and Michael Zweiback, who represents Luis Rojas in the Pico Rivera and Bassett cases, accused Leal of having a “vendetta” against Del Terra.

“We believe there is a long-standing political vendetta on Mr. Leal’s part towards my client and this company,” Zweiback said. “We have continued to ask in civil court, and we will ask in criminal, what the specific allegations are. As the civil court found, Bassett could not prove fraud and they could not provide specific facts as to the nature of the fraud.

Leal denied this and said he only conducted his investigation at the request of counsel after his initial suggestion of another lawyer was overruled.

In Bassett’s ongoing civil lawsuit against Del Terra, two “fraud” allegations were dismissed by a judge earlier this year because the school district’s complaint lacked specificity, according to the ruling. Civil cases have a lower burden of proof than criminal cases. The remaining allegations, which include breach of contract, are expected to go to trial next year.

“They couldn’t even hit the low civil bar to demonstrate that any of these acts were fraudulent,” Zweiback said.

Zweiback alleged that there was insufficient evidence in the Pico Rivera and Bassett cases.

“That’s why we believe the allegations are going to be dismissed at the very beginning of these proceedings,” he said of the latest charges.

Zweiback and Missakian, who also represents Camacho, have successfully had criminal conspiracy charges against their clients in the Pico Rivera case dropped. A motion to dismiss the remaining misdemeanor charges against Camacho and Luis Rojas is currently pending, Zweiback said.

The allegations against Del Terra in Bassett followed other similar scandals in Montebello and the Alum Rock Union school district in San Jose.

At Alum Rock, a 2017 audit by the state’s Fiscal Management and Crisis Assistance Team found little documentation of the work Del Terra performed. The report revealed rushed contracts, unexplained fees and payments for incomplete work, according to the San Jose Mercury News.

The district filed a lawsuit in 2019 alleging Del Terra committed fraud and breached its contract. He is expected to go to trial in 2023.

The Santa Clara County prosecutor, however, declined to press charges following a three-year investigation into Del Terra, the Mercury News reported. Prosecutors confirmed that many of the previous criticisms were accurate, but determined that Del Terra’s actions were not criminal, aside from a potential conflict of interest that had passed the statute of limitations.

A 2018 FCMAT audit of the Montebello Unified School District again criticized Del Terra, the construction manager of the district’s $300 million bond program, for submitting invoices with little or no vouchers. Auditors alleged that the contract with Del Terra was “non-commercial” and too favorable to the contractor, and found no evidence that it had been reviewed by district attorneys.

The district attorney’s charges against Camacho and Luis Rojas alleged that the two men conspired to launder contributions to Montebello Unified School District board member Joanna Flores. Camacho has been described in related lawsuits as a conduit for the contractor’s dealings with the school district.