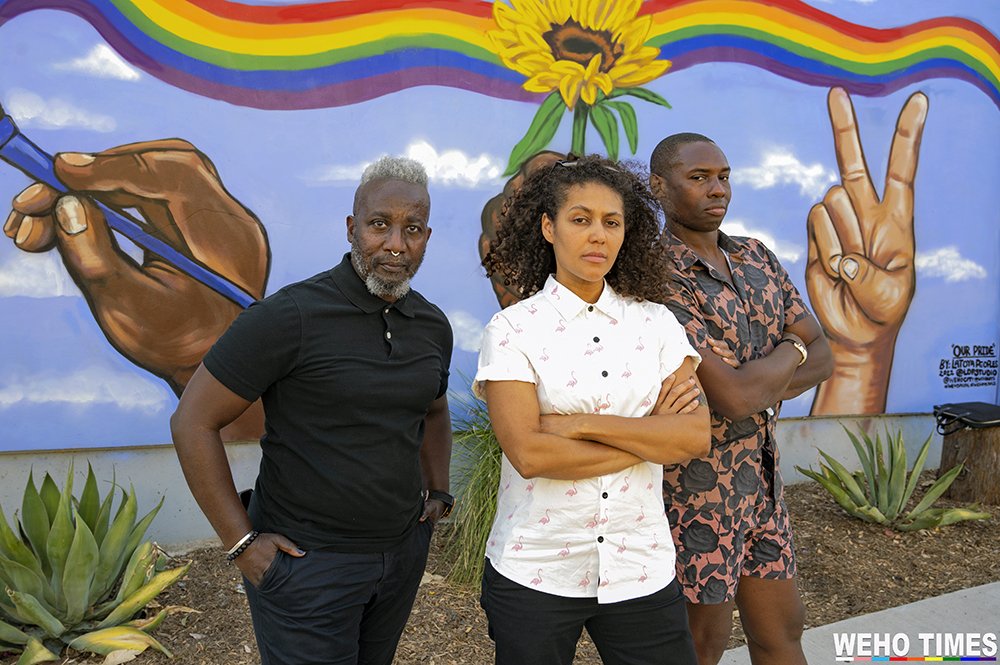 Leaders of West Hollywood’s black community, including current and former West Hollywood public safety commissioners, as well as a West Hollywood task force and advisory board member, issued solo statements with Shea Gibson, the COO of Block by Block.

Following a recent controversy where a local blog unearthed Mr Gibson’s past life 27 years ago and wrote about his intentional homicide conviction in Georgia, in 1995, members of the community have come forward with statements supporting Mr. Gibson for paying his debt to society and serving his sentence. Support was expressed via statements submitted to this publication.

Statement by Todd Hallman (Chairman of the Safety Commission)

My name is Tod Hallman and I have lived in the Eastside of the City of West Hollywood for over 30 years. I’ve been the Watch Captain for WEHO East Neighborhood since 2015, and I’m currently Chairman of our city’s Public Safety Commission.

I was first introduced to Shea Gibson by David Aguliar, who was the Block-by-Block (BBB) ​​Operations Manager before Shea took on the role. From our very first meeting, I felt completely confident that as David moved into a new position, we were in very good hands with Shea Gibson. Since 2019, Shea has served West Hollywood residents, visitors and businesses with passion, dedication and professionalism. Many of you may not be aware that BBB was originally deployed on the Eastside with limited capacity; however, as the program became so successful, its hours of operation increased, along with its citywide presence. From day one, I’ve had a wonderful working relationship with Shea. He is thorough and fully understands public safety issues in West Hollywood. With the recent City Council vote to reallocate Sheriff funding to augment our BBB Safety Ambassadors, all hell broke loose. Our once beloved BBB team found themselves in the crosshairs, especially Shea, as his past arrest record came to light. Personally, I find this infuriating as a black man, because I wonder: would this happen if Shea was white? Wouldn’t one find more compassion for a man who has already served his sentence? Wouldn’t we have asked more questions about the circumstances surrounding his case? With very little information about his past, some members of our community seemed to enjoy destroying a man’s career and name.

I’m tired of the racist undertones in our current climate, and yes, that includes West Hollywood. Shea Gibson has paid his debt to society. Like everyone else, he deserves the opportunity to find redemption and a second chance in life. It’s insulting that his past is being used as a pawn in the current debate about the city. Shea’s tireless service to our community and a thriving career are so easily destroyed for some with a political statement to make. A black remains too easy a scapegoat, even in this wide-awake and liberal city.

I ask my fellow citizens of West Hollywood: do not condemn this man or anyone so easily. Accept that there may be a reality in which this man is a different person today than he was many years ago. Ask yourself: would you like to be defined in life by the worst mistakes of your life? Would you like society to dump you without even thinking twice?

I agree with Shea Gibson. As a former Vice Chairman of the Public Safety Commission, I have worked closely with Mr. Gibson during my tenure and he has always demonstrated professionalism and respect. Mr. Gibson’s commitment to the city of West Hollywood has been proven time and time again since 2013. It is incredibly disappointing and hypocritical that the same people who are now using him as collateral damage to sow fear and panic, not to mention of an election year, be the same people who supported him and the entire Block by Block team to manage the unmanageable and recurring problems the city was facing in Plummer Park, as well as at the intersection of La Brea and Santa Monica Blvd. When the city approved the reassignment of ambassadors to these “problematic” areas, the number of incidents was significantly reduced. This impact is due to the continued presence and immediate action of Block by Block. It’s unclear why Mr. Gibson’s personal story after all these years has been unearthed by local media when he was nothing but an excellent contributor in West Hollywood.

According to Vice President of Operations Derrick Hughes, “Block-by-Block complies with City of West Hollywood procurement and supplier policies in that we conduct employment screening, including criminal background checks, on all applicants after an applicant has received a Job Offer condition In California, employment screening laws state that employers cannot ask about criminal convictions that are more than seven years old Based on advice from the U.S. Equal Employment Opportunity Commission, if a background check reveals a criminal conviction, Block by Block considers the nature and seriousness of the offense the time that has elapsed since the offense or the employee’s execution of any penalty imposed as a result of the offense and the nature of the employment held or sought.

It is crucial that we recognize that the actions taken by local media have failed to recognize how EEOC compliant Mr. Gibson’s story is and further publishing Mr. Gibson’s story without provocation perpetuates violence. going on towards black men in this country. It eventually becomes a distraction and a source of division at a time when we should be working together.

As a black man in society, I have to recognize my own privilege among the black race. As a native of Angeleno and raised in Pacific Palisades, among my male cousins, I was one of the lucky few who didn’t end up getting caught in the system. It is very common for young black boys to be arrested for something very minor when they may have been innocent or just in the wrong place at the wrong time. Regardless of each person’s story, I’ve witnessed firsthand how black boys/young men in particular are coerced into making pleas that hurt their case and their chances of getting a job. well paid as they grow into adulthood. As they are repeatedly rejected as they try to find a good job or do the right thing, they become discouraged and often fall back into a cycle that welcomes them with open arms, the prison system.

That said, while I don’t personally know Shea, I can guarantee you that I know 70% of his story and recognize that he was hired by Block By Block 18 years after he committed his crime. He served his time and was able to demonstrate a straight and arrowed path. As a society, we like to place the Scarlett letter on black men, sending them back to the prison system, which is the only one that welcomes them with open arms. Let’s give rehabilitated members of society a chance to excel. They too have families, dreams and a desire to add value. The hateful rhetoric targeting Shea Gibson is strictly contrary to the focus on the city of West Hollywood. Social justice means equal opportunities for all. If we applaud actors like Tim Allen, Robert Downey, Jr and Christian Slater, who are all ex-cons and have turned their lives around, I’m sure we can find in our hearts the urge to give Shea Gibson a shot. to excel. in a field where he has shown success and courage.

As President Obama once said, “we are the change we seek.”

I am in isolation with Shea Gibson as an African-Caribbean transwoman and board member of the City of West Hollywood Transgender Advisory Council and believe in their abilities as a leader.

On November 25, Shea Gibson and Cesar Barrios were in an LAPD Hollywood Division auto area when they walked into an armed robbery in progress. Without a second of hesitation, your people began to effectively defuse the situation. Mr. Gibson remained inside the store and began to get bystanders to safety while Mr. Barrios got out and called 911.

Once the suspect fled, Mr. Gibson and Mr. Barrios followed him from a safe distance and directed the responding officers as they arrived. After enough officers attended the scene, Mr. Barrios and Mr. Gibson began diverting traffic to prevent unconscious citizens from getting into a life-threatening situation.

Please convey my sincere thanks to Mr. Barrios and Mr. Gibson for their gallant actions last November. Their conduct helped protect the lives of many vulnerable members of the community and was well suited to the level of performance I expected of one of our officers here at LAPD.