Counts have arrived for the Rutland School Board after the recount 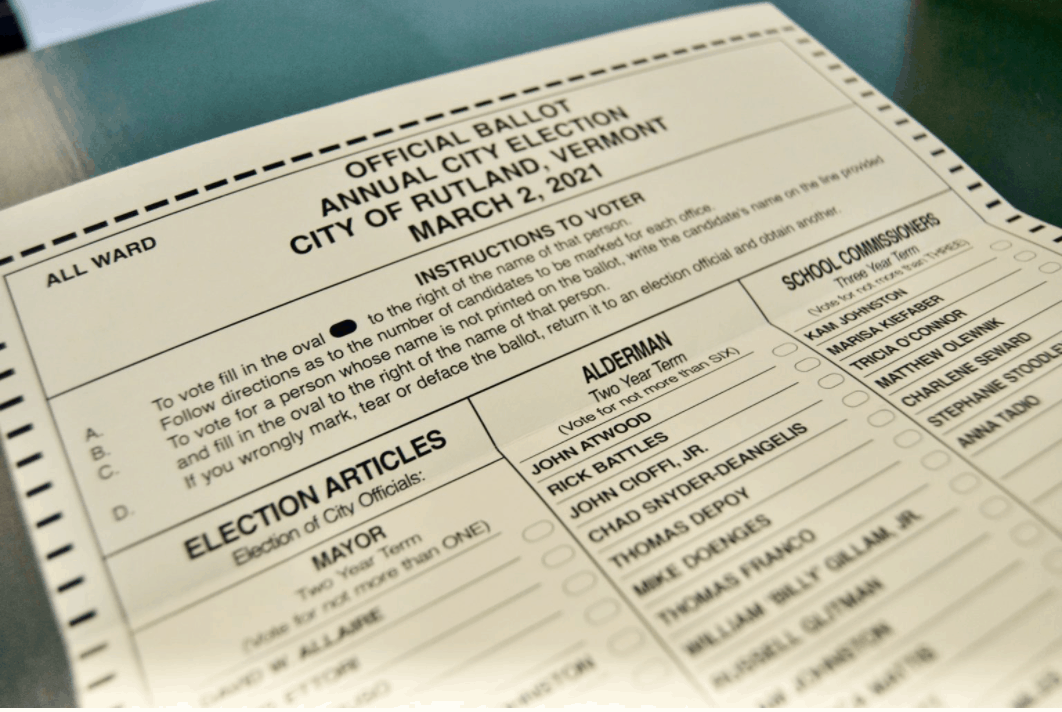 After a recount, Rutland City finally has new school board members.

The ballots were recounted on Sunday March 6 after a very tight race. Ten candidates fought for four open seats, with the third, fourth and fifth candidates getting within five votes or less of each other. But the recount did not change the top four spots.

Karen Bossi secured a place on the board by five votes in the recount, beating Marisa Kiefaber, 1295-1290. Sarah Atkins Doenges finished third with 1,297 votes. Marybeth Lennox-Levins was the top voter with 1,456 votes, followed by Courtney Collins with 1,442 votes.

The final tally showed Kiefaber was the only unelected candidate who was part of the Rutland Forward Group, a progressive political group supporting both Council of Aldermen candidates and School Board candidates. Many of them advocated for the Ravens mascot. Collins, Doenges, Lennox-Levins and Kiefaber were endorsed by this group along with candidates elected to the Board of Aldermen Anna Tadio, Michael Talbott and Matt Whitcomb.

Bossi, meanwhile, was part of Rutland Parents 4 All Students, a more conservative group. Bossi said she preferred the Raiders’ arrowhead mascot and logo. She was the only successful candidate from the group of four. Other members included Bob Pearo, Heather Hauke ​​and Cindy Laskevich.

Local elections are non-partisan and the involvement of advocacy groups with collective messages is new to the city.

“It was a very close race, it shows everyone’s vote matters,” Bossi said.

The recount came after the city ran out of ballots for the first time in City Clerk Henry Heck’s 14 years as clerk.

Heck ordered 3,000 Australian ballot papers for Town Meeting Day on March 1, 500 more than usual, but ran out before the polls closed. City clerk staff photocopied approximately 215 ballots and counted them by hand.

The results were posted on the city’s website the next day, but quickly removed after Heck noticed an error.

Heck said Kiefaber’s fiance, Devon Neary, who is on the council of aldermen, called him after noticing an anomaly on PEG-TV. Heck said a data entry error in a spreadsheet for Ward 2 negatively impacted Kiefaber’s vote tally.

Heck took responsibility for the confusion. He said he worked 5 p.m. on the day of the town meeting and was inundated with people wanting to know the election results.

The high turnout was likely caused by the ongoing debate over Rutland City School Board mascots, which has been divisive in the city. Board members replaced the controversial Raiders mascot with the Ravens, and then again with the Raiders recently. Some have called the Raiders’ mascot racist, while others have said the mascot is an important part of Rutland’s history and identity. All school board candidates in this election have pledged to put the mascot issue behind them in previous interviews.

A total of 2,993 ballots were counted. Heck said about 100 absentee ballots were not returned and a number were spoiled.

“They can be chewed up pretty quickly,” Heck said.

There were a lot of people in Rutland for an election in March, but that wasn’t seen as a big turnout for the town. The last presidential election saw an 80% turnout — about 8,000 voters, Heck said.

“It was one of those elections that was an anomaly,” Heck said.

Heck said smaller elections are usually more difficult. “Those are the ones that cause the most problems because if there are no people around it can create problems,” Heck said. “The workers would like to be good and stable throughout the day.”

After Kiefaber called for a recount on Thursday, March 3, the city had two days to prepare. Sunday was the earliest a recount could have taken place. Heck said he wanted to put an end to the rumors and conspiracies that were brewing on social media.

“The sooner you can put things to bed and move on, these people are leaving,” Heck said.

It took about four hours for the Council of Civil Authority to do the recount.

“My office looks like New Orleans after Katrina,” Heck joked Monday after the counts ended.

Several candidates were at the recount to attend their families. Bossi, who was at City Hall for the recount, said she took issue with some members of the Council of Civil Authority being part of the Rutland Forward. She asked them to recuse themselves.

Bossi said she was also concerned that several school board nominees and council of aldermen nominees are tied to and participate in the council of civil authority. Matt Whitcomb, part of Rutland Forward, is engaged to Courtney Collins. Michael Doenges is married to Atkins Doenges and Devon Neary is engaged to Kiefaber.

Whitcomb said he abstained before Sunday’s recount because Collins was his finance. Devon Neary and Michael Dogens also abstained since their relatives were in the races.

“I think everyone who knew they had a relationship proactively abstained,” Whitcomb said.

Board of Aldermen members Paul Clifford, Sharon Davis, Carrie Savage and Michael Talbott participated in Sunday’s recount, according to Heck. Savage and Talbott are both part of Rutland Forward.

Whitcomb said Bossi insisted that anyone who did not support his point of view should abstain.

“She seemed very comfortable with those who supported her,” Whitcomb said.

Whitcomb was elected to his third term on the day of the town meeting, with 1,846 votes – the most among seven candidates seeking five seats.

Outgoing Council of Aldermen members Talbott and Davis were also re-elected along with Chris Ettori, a former alderman, and newcomer Anna Tadio.

“I was happy to see more people than expected coming out in a slow year,” Whitcomb said.

Some have also been concerned about the amount of money raised by the groups. The Rutland 4 Parents group raised about $2,000 for this election, Heck said. Rutland Forward, a state-registered PAC, raised $5,185, according to a campaign finance report. Each of its seven contestants received $571 for personal promotion. Whitcomb said he raised a total of $2,239 himself.

Davis, a longtime member of the Board of Aldermen, said the new wave of candidates from Rutland Forward will make the town more progressive.

“I think when a group like Rutland Forward pushes their candidate, they’re usually successful,” said Siad Davis. “I think people need to find out who these groups are, what their agendas are, who’s behind them, who funds them, and then vote from there. I think people should not only vote with their face, but know what the programs will be. »

Candidates have until Friday March 11 to appeal the vote, but that seemed unlikely.

“Now that we have a clear vote count, I’m comfortable accepting defeat,” Kiefaber said in a text message.