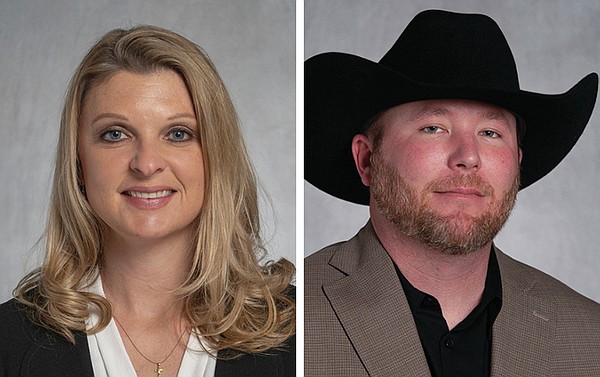 VAN BUREN — The Crawford County recount for the State House District 25 Republican primary between Jody Harris and Chad Puryear has been suspended until Wednesday, at Harris’ request.

District 25 is in Crawford, Franklin, and Washington counties

The Franklin County Elections Commission was scheduled to meet late Thursday afternoon to decide when it will conduct a recount, according to a spokeswoman for the county clerk’s office.

“We stopped the recount today because I asked to see the original mail-in ballots, and when I asked for those, Elections Commissioner Bill Coleman told me they weren’t there at the election commission office. And when I said where are they, he said they were at his house. That’s when I officially said we had to shut that up,” Harris explained. “That is not correct. There is no reason for the ballots to be at the home of the Election Commissioner.”

Harris, who lives near Fayetteville, trailed Puryear by six out of 4,412 votes. Puryear lives near Hindsville.

Coleman says the problem was caused by incorrect scheduling for the primary election due to the recent redistricting. He said the county clerk’s office worked to verify that voters had the correct information on the primary ballots, but by that time the mail-in ballots had already been mailed.

“When the clerk’s office returned and reviewed the ballot requests they had mailed out, there was only one person who had received an incorrect ballot, as far as content for which they were supposed to vote,” Coleman said. “The county clerk contacted this voter, and they made the exchange to get the correct ballot so they could vote. Everyone else had the correct information there on who to vote for.”

“The problem was that when those ballots came back, they were programmed and coded with the original election programming,” he explained. “When we went back and reprogrammed it, it changed the code to barcodes so it could read, so the tabulators wouldn’t read those ballots. So we processed all the ballots on the day of the poll.”

Coleman added that the Crawford County Election Commission is working from two offices as they move equipment to a new building. He said the old office was adjacent to the county courthouse, making it easier for people to observe and count ballots on election night.

“Since we have these two offices and everything, however, what I did yesterday was to transfer these spoiled ballots whose votes we had transferred to the new stock of ballots, I was transporting them from a place to another, along with a bunch of other stuff, and I ended up leaving them in my truck and they ended up coming home with me,” he explained.

Coleman reiterated that the votes were properly transferred to the new ballots, calling out the ones he had in the trash can of his truck at the time. He said he’s been in contact with the state Board of Election Commissioners and the election officer in the secretary of state’s office to explain the matter.

“If Miss Harris hadn’t left this morning, based on my conversations with the board and the secretary of state’s office, we could have resumed the count today and completed it,” Coleman said. . “But she left before I got back there, so we didn’t want to go back to the recount without her being there. On top of that, what I asked the council of state and the office of the secretary of state , that’s if they wanted to send observers, that might calm things down a bit, and they can be there and see the process as we go through it.”

Coleman said the recount for Crawford County was postponed until 9 a.m. Wednesday and the results will likely be announced by the end of the day.

“I hope truth and transparency will prevail and that we will have a good result for the election for either candidate,” Harris said. “I think anyone who works hard and stands for election, what we want at the end of the day is a fair and truthful result, so we want to make sure that all the ballots are counted and we have an opportunity to transparency.”