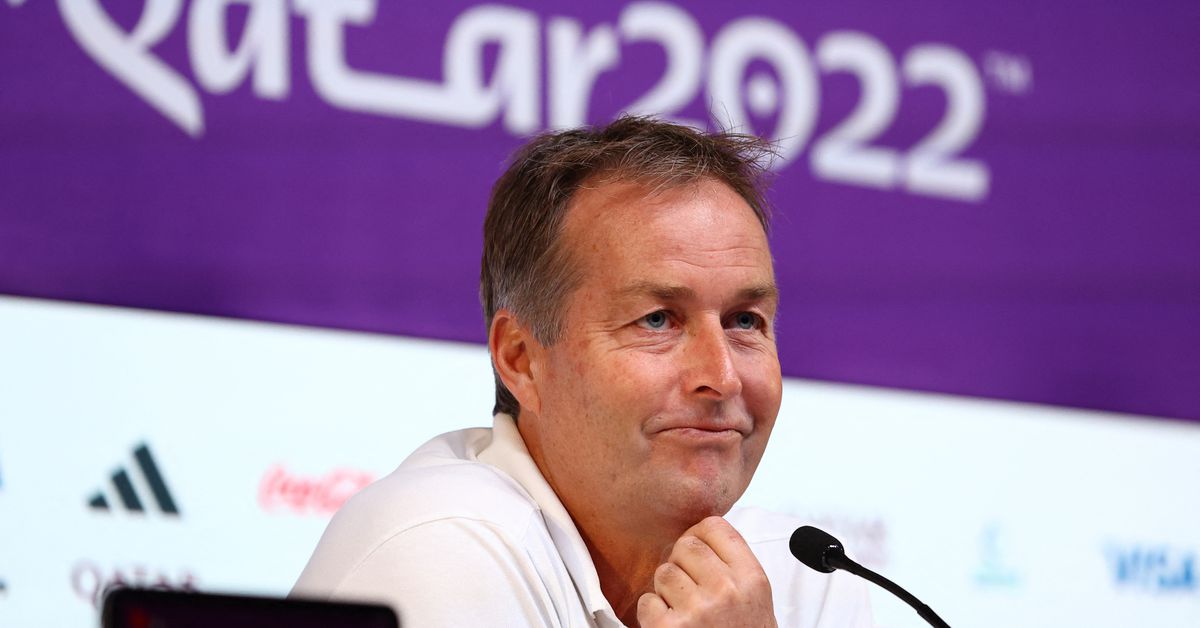 AL RAYYAN, Qatar, Nov 21 (Reuters) – Danish coach Kasper Hjulmand said he saw no reason to sanction his team for their plan to wear a One Love armband, but said it was impossible to require a player to do so if it involved disciplinary action. in the field.

The captains of England, Wales, Belgium, the Netherlands, Switzerland, Germany and Denmark will not wear ‘OneLove’ armbands after FIFA made it clear they would be booked, indicated the associations in a joint press release on Monday. Read more

Hjulmand, who spoke ahead of the release of the joint statement, said a move to punish teams for armband use carried a “controversial message”.

“Imagine going onto the pitch with a clear yellow card to start,” he told a press conference. “It’s not possible. We have to make sure it’s not up to the players to make that decision.”

Although not aimed solely at the rights of the LGBTQ community, the armband has particular significance in Qatar, where homosexuality is illegal and punishable by prison.

“It’s not something made up for this occasion. It’s something we’ve done before,” Hjulmand said. “To be honest, I don’t see the problem. For me, it’s also a big question mark.”

Denmark qualified for the World Cup by winning nine of 10 matches and conceding just three goals, making them strong contenders to reach the final stages of the tournament.

“This group of players have the quality to win,” Hjulmand said. “I mean win it all. Are we the favourites? No. But we can beat everyone that day.”

Tunisia, Denmark’s first opponents, have failed to reach the knockout stage in their previous five finals appearances. In their five World Cup appearances, the Danes have only been knocked out once in the group stage.

Denmark’s World Cup opener will also mark a personal victory for playmaker Christian Eriksen, who suffered a near-fatal heart attack in his Euro opener in Copenhagen last year. , but has since made a full recovery.

“We are all happy and grateful that Christian is here after what happened,” Denmark captain Simon Kjaer said. “As a footballer he is probably one of the best I have ever seen in terms of quality and love of the game. Every minute he plays is just a plus for Denmark .”