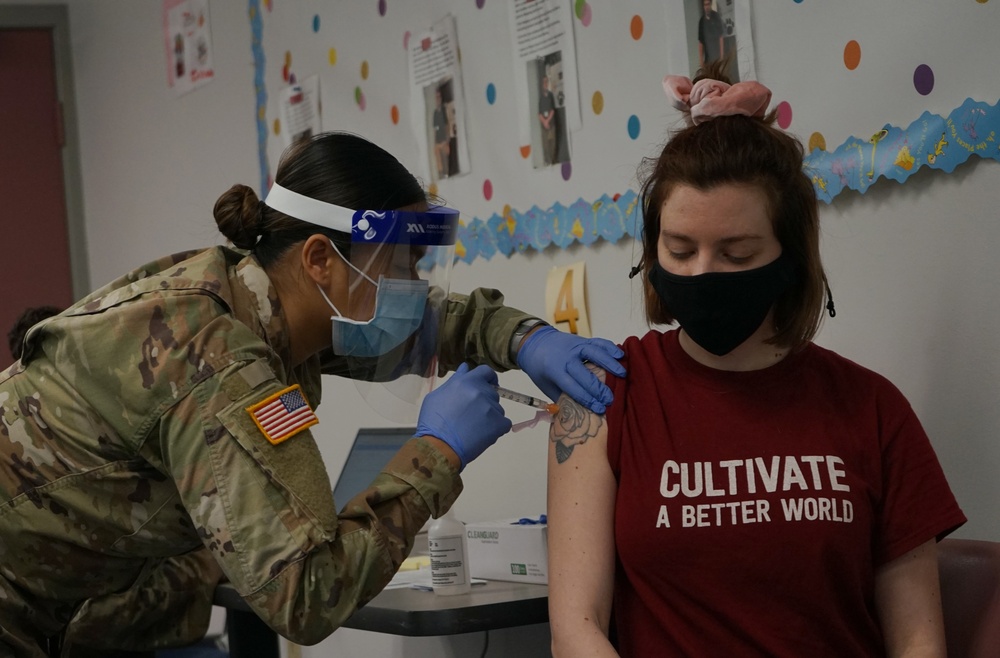 Approximately 350 soldiers and airmen took part in the vaccination mission, which ran from March 11, 2021 to June 29, 2021. They administered 81,571 doses of vaccine to Commonwealth residents and supported sites that administered 566,163 doses in total.

Several Pa. Guard members participated in voluntary COVID mapping operations in support of the Pennsylvania Department of Health between July 2020 and August 2021. They contacted people who tested positive for COVID-19 and walked them through protocols quarantine, while collecting data provided voluntarily. In total, Pa. Guard members provided more than 7,566 hours during 106 days of voluntary COVID mapping support.

Here’s a look at some of the Pennsylvania National Guard members who have been supporting COVID medical missions for a long time.

A medic with the Pennsylvania National Guard Joint Force Headquarters Medical Detachment of Philadelphia, Spc. Han Thach has been on order since December 2020. Prior to going on order, Thach was a full-time student at Drexel University in Philadelphia, where she earned a degree in biology. She has postponed finding full-time employment while supporting COVID-19 medical missions.

During his time on command, Thach worked in long-term care facilities performing medical and general-purpose duties, at vaccination sites, and at COVID-19 testing sites.

“It’s definitely not what I expected when I joined as a doctor, but it’s been interesting,” she said. “I feel like it’s a different level of care based on what we’ve been trained to do as combat medics. It certainly took a lot of interpersonal skills and social skills to talk with residents, nurses and other staff. It was a great experience.

Thach said she and her fellow service members have received a lot of gratitude from LTCF residents and staff.

“That’s probably the most rewarding part of these assignments, knowing that we’re making a difference for someone,” she said. “There were only a few missions that felt overwhelming, but that’s because the facilities are understaffed and we don’t have enough help. But for the most part, there’s no had only a handful of missions which were overwhelming.

There were a few challenges during the LTCF mission, Thach said.

“There was a mission where I was assigned to a COVID unit and there was another helper and it was just me and her for about 15-20 residents who were quite dependent on us,” she said. “Sometimes we barely had time to sit down and relax or have a bite to eat.”

SPC. Matt Zechman, a medic with Headquarters and Headquarters Company, 2-104th General Support Aviation Battalion, of Cleona, Pennsylvania, has been on command since March 2021. Prior to coming on command, he worked as an EMT, and he also owns and operates a part-time roasting business.

While on command, he assisted in vaccination clinics, performed contact tracing for the Pennsylvania Department of Health, and assisted in long-term care facilities. Currently, Zechman is in charge of managing training certificates for service members on LTCF missions.

Zechman said his first assignment was at a vaccination clinic and he personally administered more than 1,500 vaccines.

“Honestly, it was by far the best time I’ve ever had in the military,” he said.

Zechman said the LTCF mission impacted him the most because he got to know some of the residents.

“I met incredible residents,” he says. “I used to run Walmart errands for them to get them the things they needed, and I actually have a pen pal now from one of the missions I was on. I wrote back and forth to him. To be able to meet people and go there knowing that we have absolutely made a difference has been great.

The LTCF mission was somewhat difficult because, Zechman said, because he is not a qualified nurse or a nursing assistant.

“So it’s tough when we go somewhere and they expect us to sink in immediately and basically be one of them,” he said. “It takes a lot of versatility to go from place to place and learn new residents. Every place is different and their operating procedures are different.

An ammunition specialist with the Fort Indiantown Gap Training Center in East Stroudsburg, Pa., Spc. Nadiah Sims has been in command since March 2020 and performs multi-tasking duties. Prior to placing orders, Sims worked as a baker.

Initially, Sims worked at Fort Indiantown Gap performing administrative duties. From January 2021, she began working in long-term care facilities, and she has also worked at COVID-19 testing sites, assisted at vaccination sites, and worked with the Department of Health. of Pennsylvania for contact tracing.

“I’ve been a home health aide, so going to these nursing homes is not a challenge for me,” she said. “Even though it’s unfortunate circumstances, it’s a good experience for me because my unit isn’t deployable, so I can’t really do much. Now I work with other units, other branches, and civilians, so it’s been a learning experience for me.

Having experience as a home health aide was beneficial when she started working in long-term care facilities, Sims said.

“I didn’t go into these missions ignorant of certain medical terminologies and how to care for patients and so on,” she said. “And it’s easy for me to take any training, like temporary nursing assistant training, that we have to take.”

The most rewarding part of these missions, Sims said, was being able to help others.

“I fell, that’s what kept me going,” she said. “People need help and that’s why I’m here. It has to be done.

SPC. Bryan Raber, a construction equipment repairer at Fort Indiantown Gap Training Center in McSherrystown, Pennsylvania, has been on command since March 2020 in a multi-purpose role. Prior to placing orders, Raber worked full time in the maintenance department of a wire mesh company.

The missions were difficult, he said, as the situation evolved rapidly.

“Guidance and best practices have constantly changed throughout all of this, but it’s been rewarding,” he said. “It’s interesting how we’re actually giving back to the Commonwealth now, in addition to going to the normal drill weekends and working in Gap. The reason we enlist is to serve our state.

Raber, who is married and has children, said it was difficult to be away from his family on some missions.

“We’re away from home for a week or two at a time, then when we get home, as the numbers tend to go up, our time at home has gone down, so we have a few days off, and then we we’re back on the next mission,” he said. “So it’s been tough adjusting, but it’s better than going on deployment and being gone for months at a time.”

Overall, Raber said, the missions have been rewarding and rewarding experiences.

“It’s been fun – not fun, given the circumstances – but it’s been a fun change in my career,” he said.