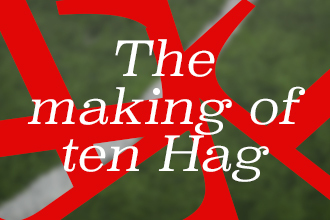 Long before joining Ajax at the end of 2017, Erik ten Hag was considered the crown prince of modern Dutch coaching – a man who bridged classic styles with that of a progressive “laptop coach”, someone who mixed data and statistics with what he saw. in the field.

Ten Hag’s best attribute was understanding people, getting into the minds of footballers and seeing things as they see them.

He once said to Voetbal International: “You have to know the man behind the player. And I tell you what, I can read that from the way a player moves, how he reacts when he loses the ball, when he concedes or gets bogged down.

“I can make a picture – a rough picture – of the man. And I can use it in my management. I choose a different approach per player. But this is only the beginning. You also have to look at the dynamics in the group. How they relate to each other. And I can see before the game what kind of game we are getting.

Stubborn and still a bit stubborn, Ten Hag’s habits can be linked to his upbringing in Haaksbergen, in the Twente region near the German border. De Tukker, as people in this region know him, was born into a family of entrepreneurs.

His father, Hennie, started as a real estate agent in 1967 and became a mogul, having nine branches across the country and over a hundred employees. But success was not at the rendezvous for him and his two brothers; it was necessary to deserve it and these values ​​were anchored from an early age.

Business work experience was necessary for his brothers, while for Erik there was a sports-oriented path. While his family didn’t necessarily want him to work in football, preferring a full education instead, they were supportive when the choice was made. FC Twente was his first love.

Ten Hag’s playing career has been solid, if not spectacular. A fine centre-half, he had three separate spells at Twente with time at De Graafschap, Waalwijk and Utrecht in between and winning the KNVB Cup in 2001 with the Enschede club – when Ten Hag captained the team – was his only major. honor. The cup win was special for Twente, coming just a year after the Enschede fireworks disaster at the SE Fireworks depot killed 23 people.

What Ten Hag may have lacked as a player he made up for in intelligence and awareness – proving to be an essential part of any team he played for. He retired in 2002 at the relatively young age of 32, having made over 200 appearances for his boyhood club. Soon, he will move on to coaching and as a successful man-manager with a strong emotional awareness, he had from an early age the qualities to have a good career.

Despite retiring from his playing career, he did not leave Twente, working there as a coach with the club’s youngsters before being thrust into the role of Fred Rutten’s assistant with the first team. He was intrigued by the mindset of professional athletes, eager to learn more and improve in his craft.

As a youth coach, discipline and integrity were his main priorities, while building a team and working for each other were his main goals. He retained the old values ​​– the ones he was raised with: shoes had to be black, training vests had to be folded, not thrown away. These habits were non-negotiable.

Among his personal library, books on sports psychology such as From Winnaar is Gezien (The Winner is Seen) by the famous Dutch sports psychologist Peter Blitz and Effect Norwegian skater Johann Olav Koss are the favourites. Ten Hag has developed a close bond with Rutten, who will leave for Schalke in 2008 and when Steve McClaren joined as a replacement, the Englishman was quickly impressed with his new assistant’s work.

Upon arrival, McClaren was immediately given six sheets of notes and suggestions about the team he took on, and a day later more came to help him acclimate to the task. to accomplish. That season they embarked on a title fight with AZ Alkmaar, led by Louis van Gaal, but fell short by 11 points, finishing second. They qualified for the Champions League, however – a decent comeback for the club.

It was the only season the pair worked together and after more than 20 years supporting Twente, playing for them, working for them and helping the first team, Ten Hag left on a sour note, joining PSV Eindhoven , where he would reunite with Rutten. as his deputy. The case would go to court, as Twente hoped to be compensated for signing Ten Hag, but the arbitration committee decided otherwise.

His role at PSV was similar, working with the first team and also keeping an eye on the club’s emerging youngsters. He played an important role in the development of an emerging Memphis Depay and then with PSV’s youth teams, who Ten Hag said needed the freedom to work his magic.

His work with PSV was so good that he was soon to be given the role of head coach in 2012 – 10 years after his retirement – and that came with Go Ahead Eagles, who were boosted by the investment of Marc Overmars and is looking to make the jump after several years in the Eerste Divisie.

Upon his arrival, he made changes to the club’s facilities – small details that had a big impact on his work – and his attention to detail caught the attention of many people in the Netherlands.

This is an excerpt from Karan Tejwani’s book, Glorious reinvention: the rebirth of Ajax Amsterdamwhich is published by Pitch Publishing.