Evacuees tell of their shelter in the Azovstal steelworks in Mariupol 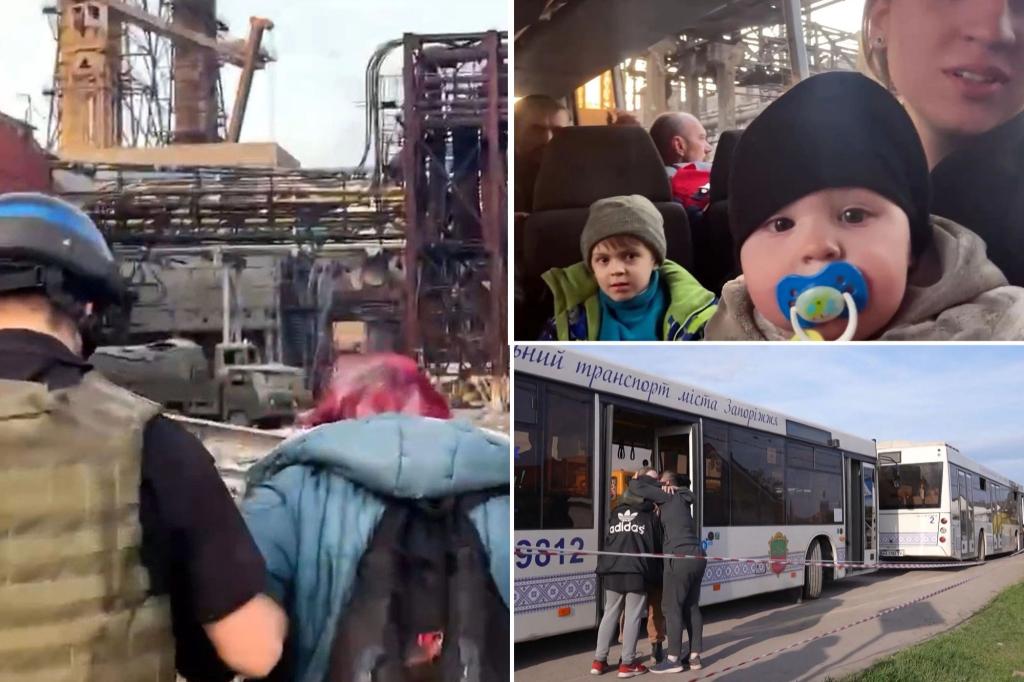 Evacuees from the besieged Azovstal steelworks in Mariupol, Ukraine, remembered the terror of cowering for weeks from Russian shelling as they made their way to friendly territory on Monday.

The first civilians are expected to arrive in the Ukrainian-held town of Zaporizhzhia on Monday, following a coordinated UN and Red Cross effort to ensure their safety.

“The soldiers came and escorted the first 11 people [of our bunker], those who were seriously ill, had asthma or needed insulin and also three of us, randomly,” Yelena Aytulova, 44, said Monday during a stopover in Russian-occupied territory. “More than 40 people, including small children, remained there.”

“For a month we ate – more than 40 of us – six cans. We boiled two buckets of soup from them and that was it for the whole day,” Aytulova said.

More than 100 civilians reportedly left the sprawling steelworks on Monday, where the Ukrainian defenders planned to make their last stand.

Meanwhile, up to 200 civilians remained trapped inside the steelworks bunkers, according to Captain Sviatoslav Palamar, deputy commander of the Ukrainian Azov regiment.

“We intended to demolish the bunkers, the entrance to which is blocked, but all Monday night the naval artillery and cannon artillery fired. All day today the aviation has worked, throwing bombs,” Palamar said.

Although Russian President Vladimir Putin pretended to halt a planned assault on the factory and declared victory in Mariupol, the site has been hit by repeated Russian airstrikes in recent days.

Natalia Usmanova, 37, remembers hiding in an Azovstal bunker during an attack.

“I was worried the bunker wouldn’t hold up to it – I was terribly scared,” she told Reuters.

“When the bunker started shaking I was hysterical, my husband can attest to that: I was so scared the bunker would collapse,” she said.

“We haven’t seen the sun for so long,” Usmanova added.

“You just can’t imagine what we went through – the terror,” she said. “I lived there, worked there all my life,” she said of Mariupol, “but what we saw there was just terrible.”

Yaroslav Dmytryshyn limped a two-day damaged car in Zaporizhzhia on Monday with a backseat full of children. Signs on his car proclaimed “children” and “little ones”.

“I can’t believe we survived,” he said.

So far, there are no plans to extract the Ukrainian fighters still entrenched in Azovstal – a mix of Ukrainian marines, national guardsmen and members of the far-right Azov regiment.

Russian airstrikes continued on Sunday after the evacuation, Petro Andryushchenko, a Mariupol official, said on Telegram.

“After the evacuation of Azovstal, the Russians opened fire on the factory again,” he wrote.

“Our defenders are just real heroes. It’s impossible to understand how they are holding up,” he added.