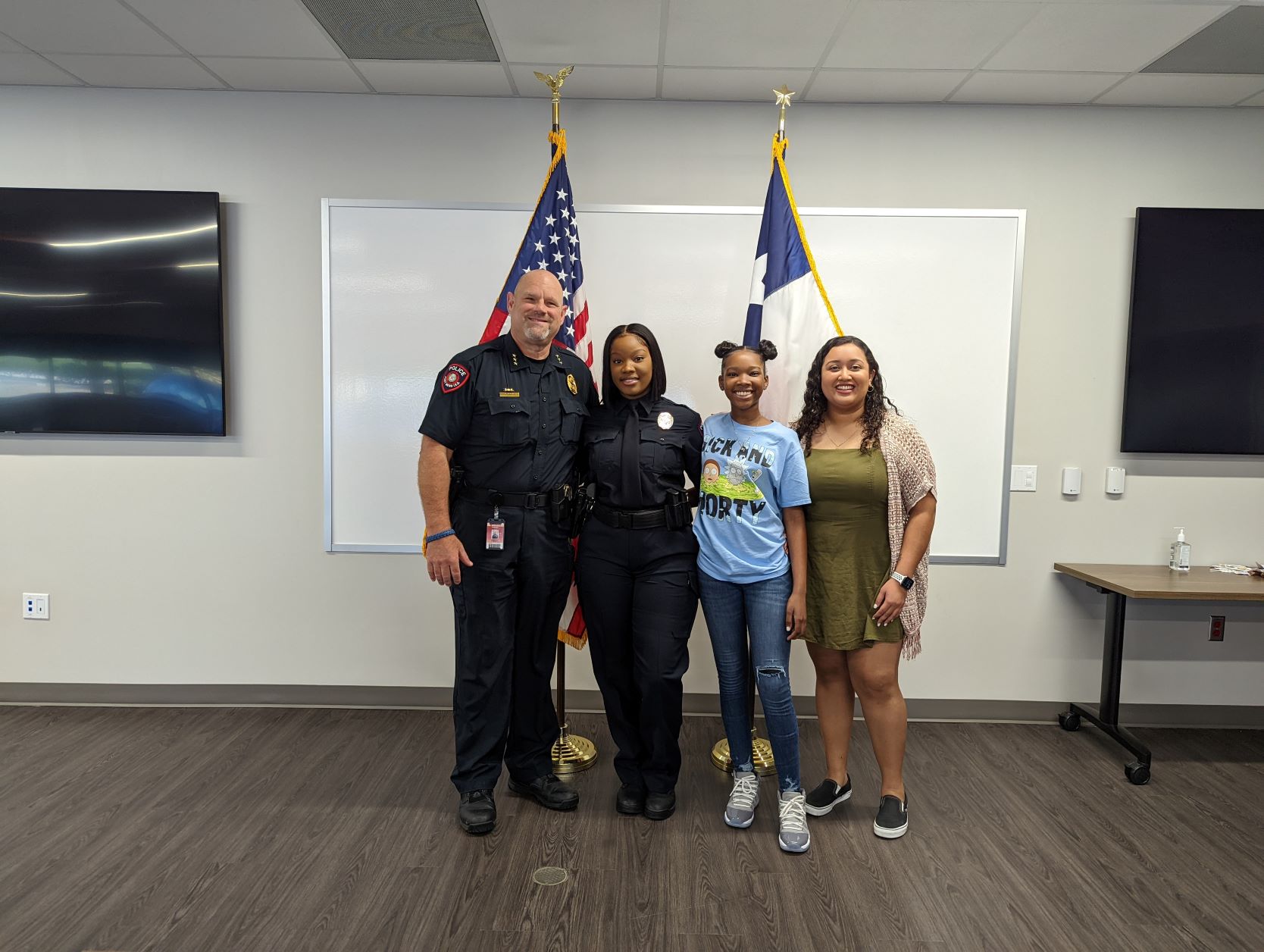 After working for years as a cafeteria manager at Fort Bend ISD, Brittany Adams decided it was time for a change.

However, she does not leave the neighborhood where she grew up and realizes a dream she has had for a long time. The 33-year-old mom became the district’s latest officer this week.

“My goal was to go to the police academy to come back to Fort Bend ISD as an officer,” said Adams, whose 12-year-old daughter is also an FBISD student. “I’ve always wanted to help children, mentor a child and now I’m getting the best of both worlds.

The 33-year-old mother-of-one swapped her cafeteria manager smock for a navy blue police uniform after an 11-year career. The change also fulfills her dream of giving back to the community that raised her.

“Brittany graduated from Fort Bend ISD,” said FBISD Police Chief David Rider, who administered Adams’ oath of office on Monday. “She owns this community. She will be able to talk to the students and have a personal story to tell them.

Adams grew up in Missouri City and graduated from Thurgood Marshall High School in 2007.

“A lot of people, even the cadets I trained with at the academy, all think ‘real policing’ happens on the streets,” Adams said. “I tried to explain to them that it starts with the children. They become adults one day. We deal with them first hand. Children also need protection. (About the shootings) I always say, ‘what if that had been your child?’ ‘Cause I know if it was my kid, I’d go in there.

The police academy application process takes up to 90 days and consists of six phases, which include a psychological and medical examination and a physical agility test. Adams graduated in July 2022.

Adams said being in charge of the school cafeteria gave him an understanding of how children process and react to situations.

“I know that maybe one day these will be the people I have to ‘arrest’,” Adams said. “I may have to interrogate them if I catch them doing something at school. I know how children behave. Being in that environment for 11 years really helped me learn that.

Adams said several factors prompted her to revisit her childhood ambition, including recent school shootings and a reassessment of priorities during the COVID-19 pandemic.

Describing her training and studies at the academy as intense and engaging, she advises aspiring officers to be prepared to put their personal lives on hold once their applications have been accepted.

To others heading for long-delayed dreams, Adams says, “If there’s something you’re passionate about, do it.”

” Do not worry. Many people are excited to try something new and step out of their comfort zone. People are too comfortable where they are. Make a plan. You may have to make some sacrifices. I put a plan in place, I knew classes started in February, I paid bills for almost eight months, paid for my car. Don’t tell yourself or anyone else that you can’t. I did it myself and I believe anyone can do it.

Adams will begin patrolling schools in the district next week with an FTO officer.