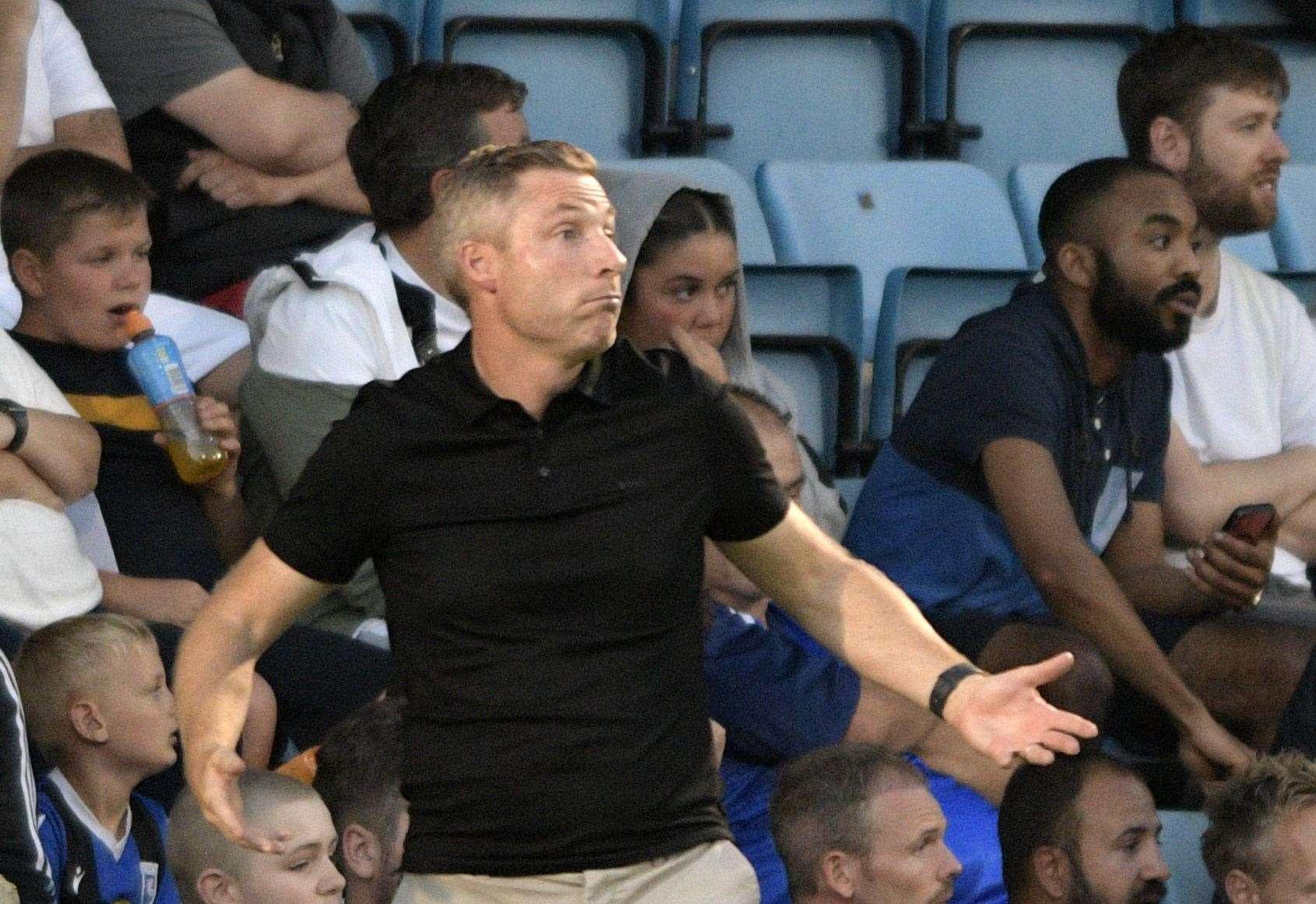 Gillingham boss Neil Harris admits he learns on the job the inconsistency that comes with running a lower league side.

He admits he’s only been able to name his best XI once this season which hasn’t helped, but the individual and collective performances haven’t changed either. It seemed like things were clicking after a fine recent performance at Grimsby, only to turn into a shock a few days later against Mansfield.

Winless in eight league games, Harris will be hoping those eight out of 10 performances come when they host Sutton United at Priestfield this Saturday.

He said: “What we’re seeing in training right now is a bit like the league stuff, a bit inconsistent, what I want to see from the group is consistent training standards, every day. .

“I expect more complete performances over the 90 minutes rather than the 30-45 minutes. Certainly playing at home we have to be better for long periods. Do I see us getting better? If I could choose a stable team, it would help us to be better.

“I see quality on the training ground and I see us scoring goals and I see us building the game, I see good habits, I see sometimes a little lack of composure. We have to give the fans something something to entertain them and move them forward, to keep that belief and confidence in the group. Do I think we’re going to improve? Yes.

“Players can be good for one game and not so productive for two, you can see the players who tend to move up from lower leagues to the Championship or the Premier League are the ones who tend to produce similar stats week after week after week. Yeah, I wasn’t used to it in the past, but it’s good for my learning curve, working with players and trying to identify them and help them develop.

“It’s a matter of consistency. We were solid and reliable against Rochdale and games like Walsall and Grimsby where we could have won it was 7 or 8 out of 10 and games we lost where they were far from close, that’s the level which we play and why the teams at the top are the most consistent with their performance right now because they have signed players who have done so in years past.

Harris was asked about the budget, whether he had the resources to pull it off, but he knew what he was getting into when he got on board.

“The responsibility for winning football matches lies with the manager,” he said. “I have enough experience to accept that, I’m not hanging myself to dry. I expect us to win more games.

“Are we big spenders in the division? No. We’ve come a long way this is nothing the chairman should be aiming for he runs the football club professionally and has endless deep pockets to go and spend the money that Mansfield, Stevenage, Salford and Leyton East can go spend? No. We did not do it.

“When I took the job I knew that whatever division we were in, Ligue 1 or Ligue 2, I knew we would have a low budget and I chose to embrace that and try to find ways to win matches.

“I understand that everyone wants to be successful overnight, I’m no different, I’m a football fan and a winner, I want to win, I don’t like losing, I hate it. That’s my job. to find ways with the staff we have to make ourselves better.

“It’s not the start we wanted and as always the fans of this football club support this team. We’re going through a tough time at the moment but I’m strong enough to make sure we get through it. There will be good times on the horizon.

At the moment, the Gills are on the wrong end of Ligue 2, with one win from 10 and just two goals scored. Some solid defensive performances have at least ensured some draws have happened along the way, but Harris knows there are expectations in the job. The team was booed on their last home outing.

Responding to a question about the pressure on the team, he said: “When you care about wanting to do better, when you set high standards and demand high standards, you want to live up to them yourself. I want us to have a few more points, to win a few more games and to have a better position in the league.

“We are there after 10 games, it is about continuously trying to improve, the pressure on the players? Yes. I think they will feel it because they will feel they are a better group than the points we have won so far. We care as a group and we want to do better.

“Have we been good enough so far? No. We only conceded 11 goals, which is in the middle of the table, in the goals conceded charts, but we didn’t score enough, the lowest scorers in the Football League. It’s not good enough.

“I don’t have the answer but we only scored two league goals. We can only work as hard as possible to try to improve it. Is the team capable of being better? Yes. I believe it is incumbent on us to start immediately, to be better.

Weekend visitors Sutton are yet to win an away league game in the league this season, with one draw and three defeats in four outings.

The Gills boss expects a tough challenge and knows his manager well. Matt Gray was a scout for Millwall during Harris’ time there as manager.

Gray led Sutton to promotion from the National League in 2021 and guided them to an eighth-place finish last season in their first as a Football League team. They head into the weekend 13th in the Ligue 2 table.

“He’s found a recipe for success,” the Gills boss said. “The model they used to get out of the National League and into the Football League with the 4G pitch and be a community club and raise funds, yes that’s the modern way we see good local clubs the do right now, and they find their way.

“Sutton has had to adapt, but that’s natural when you come into the Football League and come back to a grass pitch, different sources of income, but what Sutton is above all else is a resolute team of Ligue 2, a great physical team that asks a lot of questions from the opponent, more than anything, it will be another challenge for us this weekend.