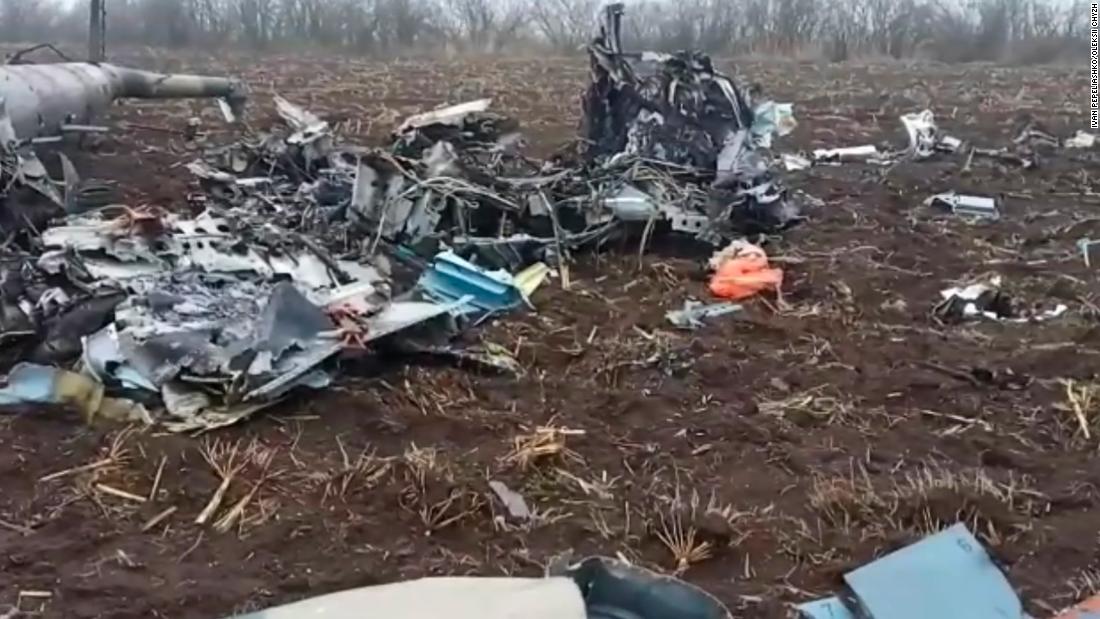 In a lengthy interview with CNN, the two pilots claimed to have been subjected to more than a month of abuse and threats while in custody in Russia, before being part of a prisoner exchange.

The Russian Defense Ministry did not respond to CNN’s requests for comment.

On March 8, a mission took them north, near the town of Chernihiv. The squadron’s four helicopters completed the mission. But as they returned to their base near Kyiv, Chyzh noticed new enemy positions below them.

It was too late. Three of the helicopters were hit by enemy fire and crashed; Chyzh and Pepeliashko were the only survivors.

“I remember waking up frozen and in pain,” Chyzh told CNN, speaking at the hospital in the capital where the pair are recovering from their injuries.

“I saw the wreckage of the helicopter and I smelled the smell of burning fuel,” Pepeliashko said. “My leg was twisted to the other side.”

Both drivers had broken legs and Pepeliashko suffered spinal fractures from the impact of the accident.

“I begged them to shoot me. I was sure they had come to kill us.”

That day, Chyzh and Pepeliashko became the first Ukrainian helicopter pilots to be captured by the Russians, according to the Ukrainian military. Their accounts of captivity are heartbreaking and the mistreatment they allege was in violation of international conventions on the treatment of prisoners of war.

The two pilots say they were loaded into an armored personnel carrier and taken to a field hospital, then transferred to a hospital in the Russian town of Rylsk, just across the border.

During the first days of their captivity, Chyzh says he was forced to read a statement on camera saying he was fine, receiving treatment and was against the war. The statement was later uploaded to YouTube.

“I was warned that if I didn’t read the statement they wouldn’t treat me (and) my legs would start to get infected and be amputated.”

Chyzh says he was also told that if he didn’t obey, his co-pilot would not receive any medical treatment and would probably be dead in the morning.

For almost two weeks, the two pilots were unable to move, confined to bed by their injuries.

They say they were interrogated every day about Ukrainian military positions, the number of Russians they had killed, the location of biology labs and where the “Nazis” were hiding.

Under the Geneva Conventionsinterrogation is lawful but “subject to the prohibition of torture and coercion…as well as the requirement of humane treatment”.

At one point Chyzh said he was pressured to adopt Russian citizenship.

“They asked me: why do you want to go back to Ukraine? Look how big and powerful Russia is. There are a lot of opportunities here,” Chyzh told CNN, while noting the irony of hearing that in a hospital room where a dirty sheet of paper covered a broken window.

But Pepeliashko says he was also moved by the compassion of some medical staff, who provided them with new clothes.

“Even among bad people, there’s always someone with a little kinder heart,” he said.

After the operation, they were taken to a POW camp; they don’t know where.

“We were put in a tent for wounded prisoners. We were only given a small cup of water every day. The worst thing for me was that I couldn’t even wash my hands. It’s just on the eighth day they gave me a bag of wet wipes to clean myself,” Chyzh says.

The pilots recalled hearing cries of pain coming from other tents. The tents were freezing, they said, and they were keeping a fire going by burning books.

After three weeks, they were again transferred to a prison in the Russian city of Kursk. Here there was no separation of wounded and healthy prisoners. All were beaten, says Chyzh.

“They said, ‘How many of us have you shot, you bastards?’ There were about 30 people in the room. There I was forced to stand without crutches, and I was forced to undress and get dressed,” Chyzh said.

Pepeliashko remembers lying on the ground and trying to make eye contact with a middle-aged woman who was among the guards.

“I was hoping that looking me in the eye would wake up her motherly instincts and she would tell everyone to stop beating. But that didn’t happen. There was a void in her eyes They wanted to prove to us that we are nothing.They wanted us to stop respecting ourselves.

Pepeliashko says it was his deepest moment of despair. “I thought: God, can’t you hear me at all?

They even ripped off the cross he wore around his neck, he said. “‘Why do you need a cross? There is no God here,’ they said.”

Their time in prison was marked by a constant barrage of Russian propaganda and efforts to brainwash prisoners, the two pilots said. Throughout the day, a radio in their cell broadcast propaganda and lectures about Stepan Bandera – a Ukrainian nationalist who collaborated with Nazi Germany and was assassinated by the KGB after World War II, and whose partisans fought both the Nazis and the Soviets.

Ukrainian prisoners in an adjacent cell were forced to sing the Russian anthem and old Soviet songs, the two pilots said.

CNN asked the Russian Defense Ministry for comment on the two pilots’ allegations, but received no response.

An exchange of prisoners

Chyzh and Pepeliashko say they survived the ordeal by imagining they were in a different place, keeping a sense of humor and dreaming about what they would do in the future as they clung to the hope that they would be traded at some point.

“We shared recipes down to the smallest detail, we talked about many different topics. I remember Oleksii talking about visiting Paris. I closed my eyes and imagined myself there. Then I promised myself that if I survived captivity, I would definitely go to Paris. It distracted from the pain,” said Pepeliashko.

In mid-April the two were informed that they would be exchanged for Russian POWs. They did not believe it until their arrival in Kyiv on April 14.

During their captivity, they were told that Kyiv had been “liberated” by Russia. They had no idea that the battle for Kyiv had never really taken place – and that the Russians had finally left the region to refocus their efforts on eastern Ukraine.

Rehabilitation will be a long journey for both of them. Chyzh still struggles to walk on crutches. He told CNN that for him, the hospital is now his home. “That’s all I have. I don’t have anything else.”

Of course, they are happy to be alive and to see their families again, but the war still weighs heavily on their minds. They worry about their comrades who are still carrying out dangerous missions.

It’s not time for the trip to Paris yet – both pilots say they want to get back into action.

“We didn’t go through this hell to give up,” Pepeliashko said. “Our whole life is the road to heaven. And we will do anything to get back into the cockpit of the helicopter.”