Meet the contractor and project manager behind GU construction projects 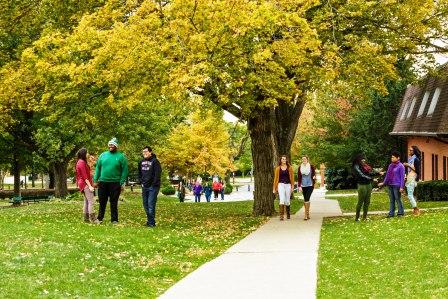 As an accounting specialist at the University of Greenville in the early 1980s, Charles McPherson learned the building blocks of the profession – assets, liabilities and cash flow.

During more than a quarter of a century in the construction industry, he has also developed other fundamental business practices: hiring great employees, exceeding customer expectations, and giving back to the institutions and people who have helped him in road course.

He will put all of these concepts to work as his Maryland-based company, CMI General Contractors, Inc., undertakes several major construction projects on the University of Greenville campus in the coming months.

“It’s business, but it’s also personal,” the 1985 GU graduate said of the opportunity to work for his alma mater. “On a personal level, it will be very satisfying to do these projects because they will make a real difference for the school.”

A 246-bed residence hall on College Avenue just west of the current campus. This 40,000 square foot building will also include a student center, dining venue and on-campus store. Additionally, the building will provide classrooms for the University’s new nursing program, a cooperative venture with St. John’s College of Nursing and other STEM classrooms. Construction work began at the end of June.

A pair of buildings in the school’s athletic complex south of campus that will honor the legacy of two GU giants – the late Robert “Ish” Smith (former GU president and baseball coach) and W. Richard Stephens ( Chairman Emeritus of GU, who was instrumental in launching the Panther football program in 1987). The Smith Building will include additional stadium seating, event space and a museum displaying his baseball memorabilia. The Stephens Pavilion building will add restrooms and change rooms for multiple teams.

A gymnastics facility on U.S. Route 40 that will house new GU gymnastics programs. Built on the site of the former Greenville Ford dealership, the building will provide training space for the men’s and women’s gymnastics teams launching this fall. It will also house a youth gymnastics program that will be offered to the community. Doing things to benefit the University is nothing new for McPherson. He served for several years on the board of the University of Greenville before stepping down in 2017.

“GU President Suzanne Davis and her team have big plans to expand the university’s impact and reach,” McPherson said. “We want to do everything we can to help the school grow by providing great new facilities.”

When meeting Nonyameko Waddell, the first thing you notice is her unusual first name. It means “patience” in Swahili.

But put a helmet on his head and entrust him with organizing a construction project, it’s obvious that his skills are as unique as his name.

As a senior project manager for CMI General Contractors Inc., she oversees several construction projects currently underway or about to begin on the University of Greenville campus. She is experienced in construction practices and holds a degree in construction management. She also has a doctorate in law, is an artist, cyclist, runner and the proud owner of a Weimaraner dog.

Before signing with CMI in January to oversee GU projects, she was vice president of construction for the Kwame Building Group and project manager for the company’s $400 million project to build a Major League stadium. Soccer for the St. Louis City Soccer Club.

Although she lived in several places in the United States growing up because her mother was an Air Force officer, she graduated from high school in Belleville, Illinois. She then attended Kennesaw State University in Georgia, where she earned a degree in construction management.

“My early years in the construction industry weren’t all daisies and roses,” Waddell said. “I’ve seen things happen that weren’t the best solutions to problems. I felt I could make things better if I knew more about legal matters, so in 2010 I enrolled at John Marshall Law School in Atlanta.

“After law school, I returned to construction management and found that having a law degree added to my skills and improved my ability to perform my duties.”

In 2018, she moved to St. Louis to join the Kwame Building Group and became the company’s project manager for the football stadium work. She spent two and a half years on the project, coordinating subcontractors, working with architects and navigating the COVID-19 pandemic. Up to 600 workers were involved in the stadium project, located just west of downtown St. Louis.

But her involvement there ended last fall when she decided it was time to move in a different direction.

“I wanted to change, to slow things down a bit,” she said. “I quit and moved to Greenville earlier this year.”

At the time, her move here had nothing to do with the construction projects she now oversees for the University of Greenville. She chose Greenville because it was near her fiancé, who worked at Vandalia. Although she had never lived in a small town before, she soon found herself enjoying the experience.

“My time here has been indescribable,” she said. “Greenville is a wonderful, healthy little town. And I have never seen a university have such a positive impact on the surrounding community. It’s inspiring.

Shortly after moving to town, however, she received a call from a recruiter looking for someone to oversee the University’s projects – a new residence hall, a gymnasium center and two buildings in the GU sports complex. .

“When that opportunity came, it confirmed that this was where I was meant to be,” Waddell said. “Everything came together perfectly. And the recruiter couldn’t believe I already lived in Greenville.

The impact of the projects will be “monumental”

She is thrilled with the impact the projects will have on the community.

“These will be monumental projects for the city of Greenville,” she said. “The gymnastics facility will attract people from the surrounding area to Greenville. The nursing program that will be housed on the lower level of the residence hall will encourage people to settle here, receive training, and then take up jobs in the area. Additionally, the new athletic complex facilities will enhance the university’s growing athletic program and provide students and the community with a building that promotes a healthy lifestyle.

“I am extremely excited about the projects we are working on. I do what I love in a place I love. Couldn’t ask for more.

For more information on the University of Greenville construction projects, visit greenville.edu/projects.