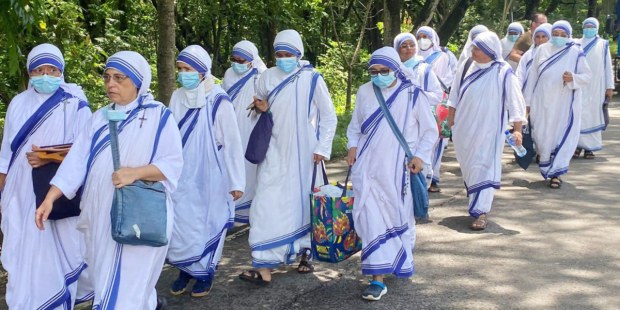 Every day, Aleteia offers a selection of articles written by the international press on the Church and the major issues that concern Catholics around the world. The opinions and views expressed in these articles are not those of the editors.

Tuesday, July 12, 2022
~
1. The painful first-hand account of the nuns of Mother Teresa expelled from Nicaragua
2. Catholic groups oppose EU vote to designate gas and nuclear power as ‘green’
3. Who will be the next Archbishop of Westminster?
4. Does the Pope have a communication strategy?
5. Two Ukrainian scholars criticize the naïveté of the pope’s position on Russia
~

“We left with great sadness in our hearts, leaving our poor there,” said Sister Agnesita, one of 18 Missionaries of Charity who were expelled from Nicaragua, after a decision by the government led by the president Daniel Ortega. “A choice that has outraged the world and revealed the extent of the brutality and stupidity of the current Nicaraguan government which, month after month, shuts down all free voice and persecutes, in particular, the Catholic Church”, explains the Catholic News Agency. SIR. “We have never done any political activity and we remember that President Ortega met Mother Teresa. Our thought has always been to serve the poor. Of course, the country is suffering, especially the Church, which is persecuted. There is no freedom, but the economic situation is also difficult and there is a growing lack of jobs”, analyzes Sister Agnesita. The Missionaries of Charity had three centers in Nicaragua, which served the poor, the people The nuns have now moved to Costa Rica and hope to “take special care” of all the Nicaraguans who have been forced to flee to the neighboring country.

In a vote on July 6, the European Union’s European Parliament approved the designation of nuclear and gas as “green” options for sustainable investment, as part of the 27-nation bloc’s efforts to combat climate change. climate change. This means that certain activities related to fossil gases and nuclear energy must be included in a list of environmentally sustainable economic activities, called “EU taxonomy”. CIDSE, a network of Catholic social and environmental justice organizations primarily based in Europe, was among the groups criticizing the vote. They echoed comments from Climate Action Network Europe, which said in a statement that “classifying fossil gas and nuclear power as green is a climate catastrophe that fuels human rights abuses, as it will increase the demand for gas and uranium”. The European Laudato If‘ The alliance also slammed the decision in a Tweet saying it was a ‘missed opportunity […] preserve the integrity of the EU taxonomy and the credibility of the EU Green Deal. »