Nothing but the net: Iowa men’s basketball student manager Jack Devlin hits a shot on the half court on senior night 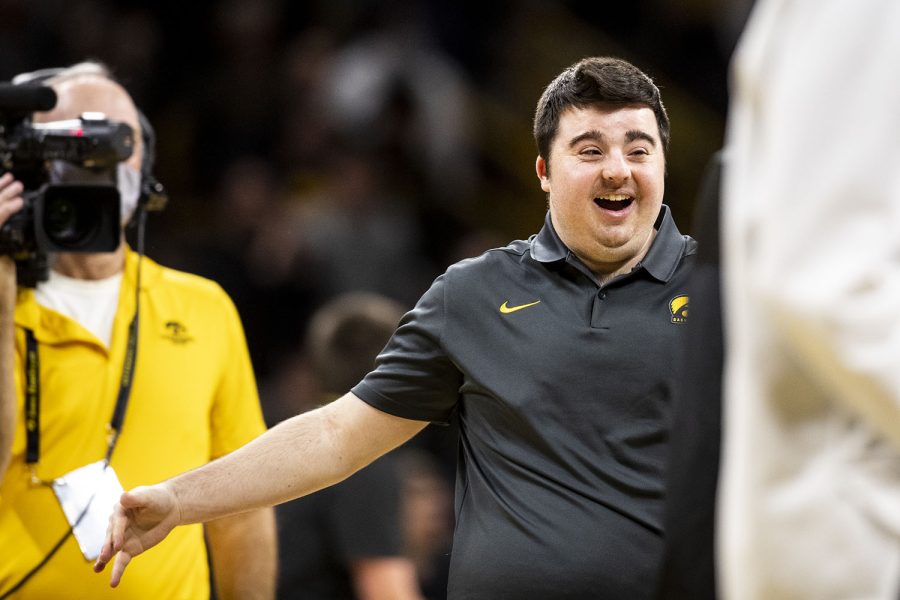 Perhaps the most memorable moment of the Iowa men’s basketball team victory occurred during a timeout.

Iowa Student Principal Jack Devlin celebrates the half-court shot during a timeout in a men’s basketball game between No. 24 Iowa and Northwestern in Carver -Hawkeye Arena on Monday, February 28, 2022. Devlin participated in the Iowa Seniors Day festivities. The Hawkeyes defeated the Wildcats, 82-61.

Austin Ash hit a TigerHawk logo 3-pointer. Jordan Bohannon kissed that same logo before leaving the Carver-Hawkeye Arena floor one last time. Connor McCaffery had a career-high five-3 points. But perhaps the most memorable moment of the Iowa men’s basketball team victory came during a timeout.

Senior student Jack Devlin drained a half-court shot on a late save in Iowa’s 82-61 win over Northwestern on Monday.

By the time Devlin was filming as part of his Senior Night recognition, the game had been pretty much decided. So instead of listening to head coach Fran McCaffery’s instructions in the group, Iowa’s players and coaches watched intently as Devlin fired shots to the basket during his moment in the spotlight. After his first attempt was just wide, Devlin dribbled past and fired his second shot.

The Hawkeye players swarmed Devlin before hugging him and jumping up and down with him in the middle of the celebration. Fran McCaffery, normally feisty and deadpan during a match, flashed a noticeable smile and chest bumped Devlin before hugging him. The PA announcer punctuated the moment with a “basket by Jack Devlin” call over the speakers after his shot crossed the net. A childish smile crossed Devlin’s face after firing. He seemed to stay there for the rest of the night, as did the tears that soon ran down his cheeks. He started kissing seemingly anyone near him on the field.

Every senior enjoys their moment at senior night, even student manager Jack Devlin. Watch Iowa swarm Jack after he lands a half-court shot during a timeout. pic.twitter.com/sQI2eEtlnH

Apparently, Devlin was so excited that he mistakenly left the arena instead of going to a post-match press conference, where he was to answer questions.

But Fran McCaffery and the Iowa players spoke loudly for him.

“It was almost like it was a scripted night,” said Bohannon, who moved up to second all-time in 3-pointers among Power Five male players. “We don’t even pay attention to the waiting time; our student manager shoots from the half court. It was almost like an open gymnasium. What a cool moment for Jack Devlin. He works a lot behind the scenes. All of our student managers do. They are some of the hardest working people in all of college basketball.

Devlin is a student at the University of Iowa TO REACH (Realizing Educational and Career Hopes), a UI College of Education certificate program for students ages 18-25 with intellectual, cognitive, and learning disabilities. Jack’s parents, Matt and Erin Devlin, told the REACH program in 2020 that it helped Jack achieve his dreams, including working for a college or a professional sports organization.

After joining REACH in 2018, Devlin started working with the men’s basketball team in 2019.

During his freshman year, Devlin was introduced to the team and attended all of Iowa’s home games. Then, in his second year, he started having a regular schedule as a student manager. In this role, Devlin and his colleagues help set up workouts and warm-ups, while keeping other day-to-day aspects of the program running smoothly. Ahead of the 2021-22 season, he was surprised and hired as a full-time trainee.

“When Jack joined the Hawkeye basketball family, he was a little shy,” Fran McCaffery said. “He wanted to be involved, but he didn’t know anyone. Our guys liked it right away. He’s not shy for long. He has personality, he has a sense of humor. I think almost immediately he felt like he was part of the group.

Ash, Bohannon and Connor McCaffery were the three senior players recognized before Monday’s whistleblower, while Devlin and two other student managers were also recognized.

Devlin knew he was going to shoot the half court in front of a Carver crowd, and the Iowa players did their best to help him prepare. The Hawkeyes were developing strategies for him to succeed. They rebounded his shots and passed the ball to him in training sessions.

“I’ll be honest, he’s been cold lately,” Connor McCaffery said. “We had practice rounds for him, and he was freezing. They’ve all been there.

“He couldn’t get it there,” replied Connor McCaffery. “Today I think it was adrenaline that got him there. And I mean swish. Second. I can’t make up for it.

Patrick McCaffery acted as Devlin’s personal hype man, Fran McCaffery said. Right before Devlin locked himself in, he punched Patrick. Seconds later, he had thousands of Hawkeye fans on their feet and cheered louder than anyone else from Monday night.

Devlin was born in New York while his father worked there. He came to UI with the intention of having a normal college experience, he once said during a feature on him who ran on the Big Ten Network. But his senior day at Carver-Hawkeye Arena was far from normal. Devlin’s photo and celebration went viral, appearing on ESPN, Bleacher Report, March Madness’ Twitter account and various other outlets. Ultimately, his midcourt moment provided a memory the Hawkeyes won’t soon forget.

“I knew as soon as this thing came in, players were going to go nuts,” Fran McCaffery said. “It’s really authentic, and it was a great feeling for all of us – for someone so special to us.”