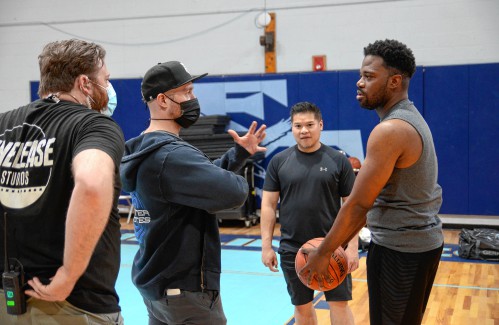 TURNERS FALLS — The locally shot and produced drama “Money Game” wrapped filming late last week, prompting cast and crew members to reflect on what they had created, even when the cameras were off.

A simple glance at the official “Money Game” Instagram page confirms Washington’s sentiment with a litany of messages of appreciation from the cast and crew, as well as behind-the-scenes displays of affection, shared multiple times by day.

“Here, not to sound corny, but there’s a hug around every corner,” Washington said.

He said the relationships on display, many of which were built from scratch on set, were furthered by the film’s content as a story about the importance of family and togetherness.

Primarily written, directed and produced by Turners Falls resident Julian Lowenthal, the low-budget film is made relevant by the real-world economic hardship inflicted by the pandemic. The drama involves “the story of an average American 2021 journey to success,” as previously described by Lowenthal. Standing in the way of protagonist James, a widower with a heart of gold with two young daughters, is Bryson, a greedy and brash business owner who represents real-world American tyranny in a broken economic system.

Filmed primarily in Turners Falls with additional filming in Greenfield, Deerfield and Amherst, “Money Game” ended at Franklin County Technical School. Friday’s shoot involved a scene in which Bryson confronts James in a basketball game and launches a series of hateful and deeply personal taunts, prompting an altercation.

“It’s pretty gross,” actor Terrance McFadden Jr. said of what it felt like to portray Bryson.

Cast and crew members have repeatedly called McFadden not only talented, but also a great person to be around outside of the fourth wall. As the people on set bonded and became what producer Tim Harms said was “like extended family”, McFadden, shaken by the face he put on for the camera, made it his duty to walk away.

“I call my fiancée every day after packing and tell her I love her,” he said.

Along with getting lost in what McFadden described as “marinating in the sauce,” cast and crew members endured the stress of big time commitments and being disconnected from family, according to Washington.

“I’ve seen so many people sacrifice and struggle through this,” he said.

Lowenthal said he “learned a lot” while directing “Money Game,” his first time leading a major union film. One of his biggest lessons, he said, was how much he needed to “keep it easy and smooth and responsive.”

“One of the things I will say is collaborating with your team is how you get better and better,” Lowenthal said, adding that those on set are “all equal.”

Harms said it was “a great experience living and working in the area for a few months,” dealing with local businesses as “Money Game” affiliates needed catering and other amenities. McFadden, who once lived in Boston and now lives in Syracuse, New York, attributed some of his zeal for the camera to his setting.

“Being in that corner of the woods spinning in Massachusetts has been an absolute blessing,” McFadden said. “There is something about this area of ​​New England that inspires excitement.

“Money Game” is slated for release in the spring or summer of 2023 at undetermined outlets.