Transit and “torture” – Rescued migrants recount the horrors of Libya 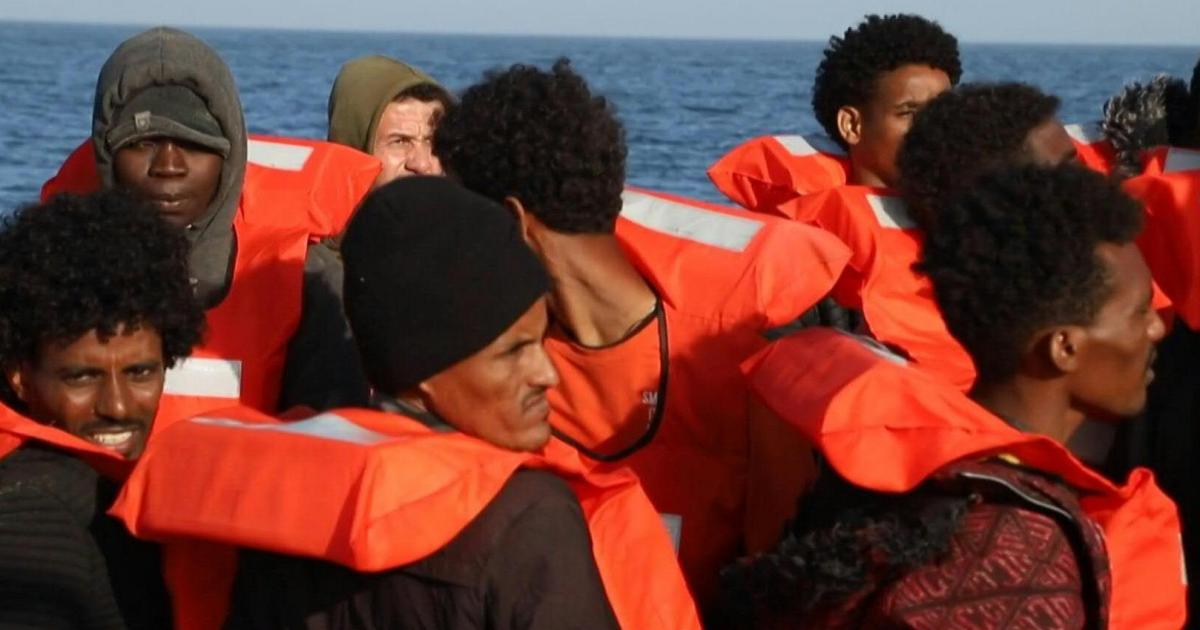 On a medical ship off the coast of Italy, rescued migrants color a map of Africa, where many began their perilous journey to Europe.

The countries are brightly colored in yellow, green, purple and red. However, Libya, a common transit country from sub-Saharan Africa to Italy, is black.

For many migrants, the country evokes painful memories: abuse, torture and trafficking.

Libya has been singled out as a dangerous country for migrants, and a UN report last year revealed “crimes against humanity” inflicted on the most vulnerable.

For some aboard the Geo Barents ship run by medical charity Doctors Without Borders (MSF), the dangers are all too familiar.

“I was tied up, beaten, electrocuted,” said 25-year-old Eritrean refugee John, who gave only one name.

He explained how he fled authoritarian Eritrea in 2018, traversed Ethiopia and Sudan before arriving in the town of Al Kufra in southeastern Libya four years ago.

“I was abducted from Al Kufra and sold to traffickers. And then to others,” he told AFP.

He eventually escaped, boarding a canoe bound for Italy, from where he was rescued in April by the Geo Barents.

Like others, he received medical treatment on board the ship, where migrants also spend time doing activities like the map coloring exercise.

John colors Libya black to signify the pain he felt during his time there.

“There is no government in this country,” he said. “No laws.”

John is one of tens of thousands of migrants who attempt the dangerous and often deadly crossing from Libya to Italy each year. More than 31,000 made the journey by sea last year, according to UN figures.

Many are flocking to Libya from other parts of Africa, boarding precarious ships to cross the Mediterranean to Italy.

AFP could not independently verify the details of John’s account, but MSF medics on the Geo Barents say many migrants arrive with chilling reminders of their time in Libya.

“We see many with real physical evidence of violence, injuries that cause long-term problems,” MSF doctor Mohammed Fadlalla told AFP.

Many migrants end up in the hands of traffickers in Libya who demand large sums in exchange for their freedom. Escape attempts can be a death sentence.

The Geo Barents helps those lucky enough to flee, criss-crossing the waters of the central Mediterranean near Italy and Libya in search of migrant boats.

It stops in Italian or international waters – never in Libyan waters – and welcomes migrants in need, sometimes for up to two weeks, before sending them back to Italy.

Fadlalla said doctors aboard the ship often use scars or bruises to piece together what happened to migrants — a kaleidoscope of trauma used to compile accounts of human rights abuses.

“Many of these survivors who suffered this torture also have psychological difficulties,” Fadlalla said.

Libya, wracked by conflict since the toppling of dictator Muammar Gaddafi in 2011, has gained a notorious reputation for migrants on the dangerous route to Europe.

A UN fact-finding mission last year found that some of the abuses faced by migrants there could be qualified as “crimes against humanity”.

“Violations against migrants are committed on a large scale by state and non-state actors, with a high level of organization and with the encouragement of the state,” wrote one of the UN experts, Chaloka Beyani.

Lawyer Jelia Sane, who specializes in refugee law and human rights, has condemned European governments for intercepting migrant boats from Libya, urging them to offer safe and legal routes.

“The evidence for the plight of refugees and migrants in Libya can no longer be ignored,” said Sane, of Doughty Street Chambers in London.

And for those who have been tortured, access to “comprehensive rehabilitation services, as required by international law,” should be offered, she said.

The 19-year-old has scars on his scalp and under his lip from being beaten with a glass bottle by his captors. They held him for several weeks in Libya, he said.

“Everywhere in Libya, you are robbed, you are beaten,” he added.

Despite known risks – and growing evidence of abuse – migrants continue to make their way to Europe.

Eritrean refugee John knew what he could face, but he went anyway.

“We know it’s dangerous. But we want to join Italy,” he said.

Independent journalism costs money. Support Times of Malta for the price of a coffee.