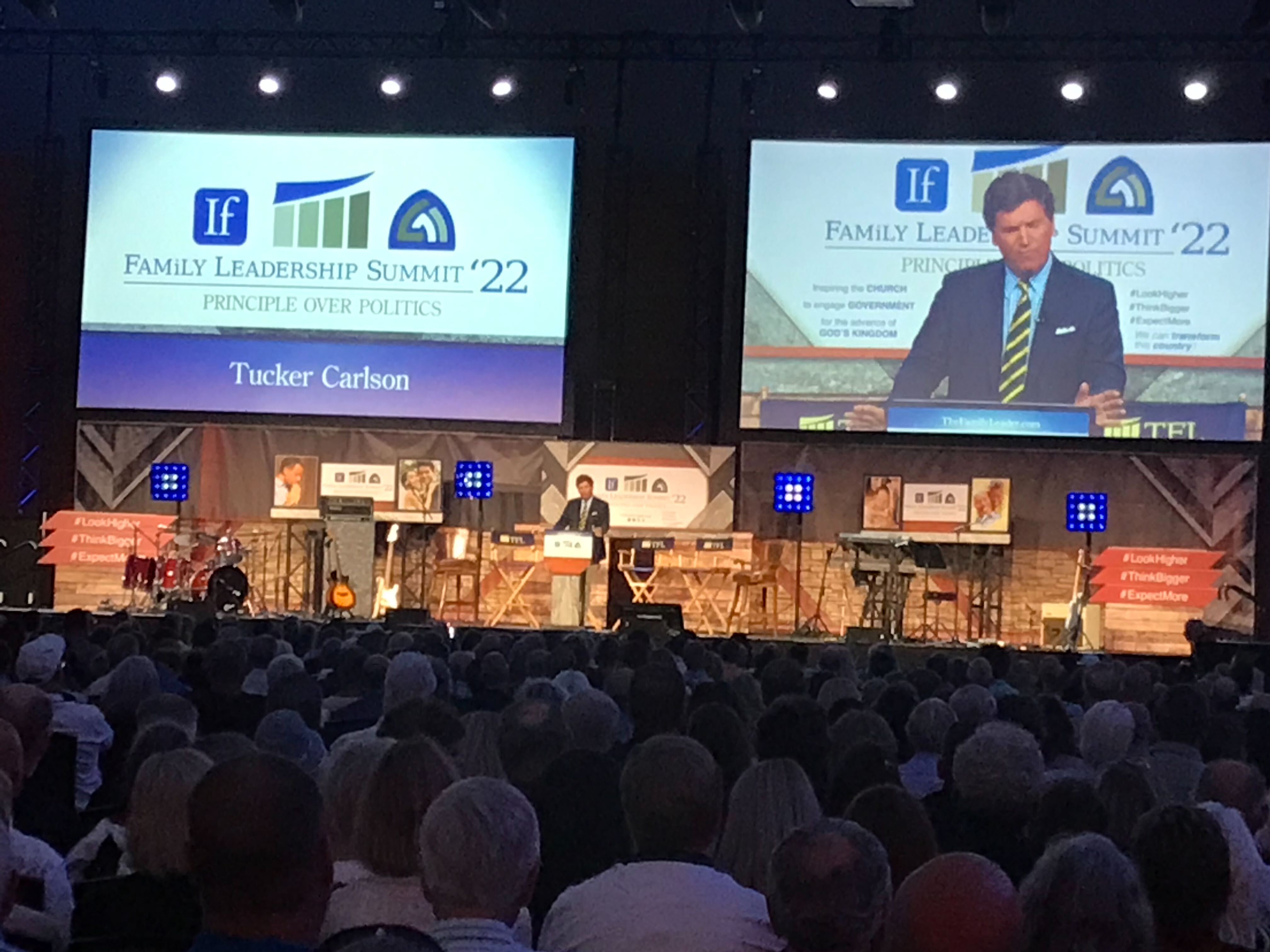 Carlson is also obsessed with what he claims is the natural, God-given order of things.

“The positive, the good, the calm, the placid, the orderly, the natural – that’s what needs to be affirmed,” Carlson told the crowd.

After attacking the environmental movement for its supposed hypocrisy, Carlson indulged in a riff on the nature of beauty, a bizarre but telling tangent.

These statements are trivial in themselves, and from almost anyone else wouldn’t deserve a second thought. But Carlson is doing something here that shouldn’t be ignored. Talking about beauty and nature, God and family, he puts forward a seemingly uncontroversial but inherently oppressive politics. And while Carlson doesn’t plan to run for office, he almost certainly provides a template and a set of talking points for far-right candidates who do.

For Carlson and the other speakers and participants here, God’s order has no place for LGBTQ people – and especially trans people. They simply cannot exist if society is to be beautiful.

“The Republican Party should be about nature in human relationships,” the Fox host thundered, pivoting his rant about how wind turbines are, to him, similarly against nature. “The most basic desire of most people – not of every person, but of most people, the overwhelming majority of people – is to mate and have children and to perpetuate the species. “

“’I don’t really know if I’m a boy or a girl.’ OK, that’s kind of the last thing that needs a positive affirmation,” Carlson said. The same goes for homosexuals and bisexuals.

The order, for Carlson, also means the mass movement to fight racist oppression at the hands of police in the summer of 2020 must be demonized.

“Our cities burned down,” Carlson said. “A lot of people died. And I thought, ‘Why should what happened between a cop and George Floyd outside a convenience store in Minneapolis be personal and painful for someone else?’

When Carlson talks about the importance of family, it’s not a feel-good truism. It speaks of a particular type of family, based on patriarchal domination, which will be imposed on people who can become pregnant and who are forced to carry the pregnancy to term. In this way, he transforms his anti-abortion views, designed to harm women economically and socially, into a vision of liberation.

For Carlson, companies like Citibank and Nike, which supposedly “pay their employees to have abortions,” have led people to believe that economic independence is a prerequisite for happiness, rather than raising a family.

“They are really saying that serving us is more important than having a family,” he said. “You will be happier growing within our company than you would be if you had children of your own.”

It’s worth noting that about a quarter of the exhibit booths at this event were for “crisis pregnancy centers,” anti-abortion spaces that pose as healthcare providers.