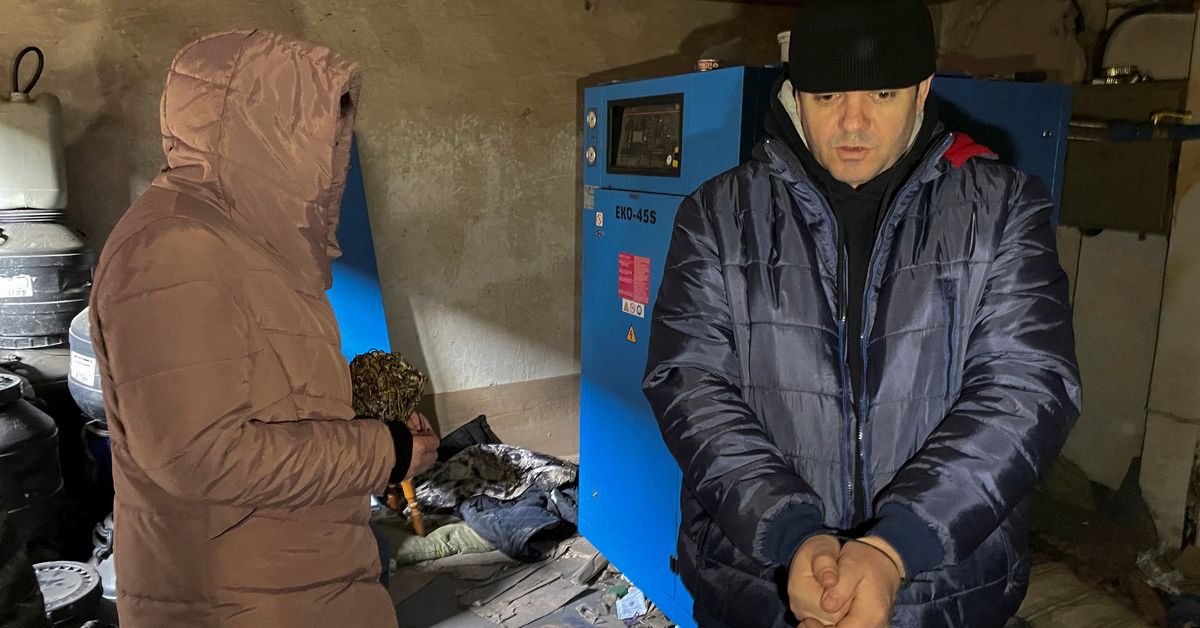 DYMER, Ukraine, April 19 (Reuters) – Volodymyr Khropun and Yulia Ivannikova-Katsemon said they were helping people flee from frontline villages in northern Ukraine when they were detained by Russian soldiers for two days in March.

Both said they were then held with around 40 other captives on the concrete floor of a nearby factory with their hands tied. Almost a week later, they were transferred to a military truck in Belarus and then to detention centers in Russia, they said.

Khropun, an electrical engineer, and Ivannikova-Katsemon, an emergency services dispatcher, were released along with 24 others in a prisoner exchange on April 9.

Standing outside the damp, windowless room where they say they were held in the once-occupied village of Dymer, north of the capital, Khropun and Ivannikova-Katsemon returned to describe their three weeks in Russian detention, which, according to they understood that they had been beaten. Ivannikova-Katsemon also said she had been Tased.

Both said they were working as volunteers for the local Red Cross when they were taken prisoner, interrogated and accused of passing information on the activity of Russian forces to the other side, which they deny.

The Ukrainian Red Cross confirmed that they were both volunteers. They were both reported as missing or unlawfully detained civilians by the Euromaidan SOS initiative of Ukrainian human rights group The Center for Civil Liberties on March 26.

Reuters was unable to independently verify all of the details of their stories. The Kremlin and the Russian Defense Ministry did not respond to requests for comment on their accounts.

Khropun and Ivannikova-Katsemon’s detailed accounts shed further light on the mistreatment Ukraine allegedly suffered in captivity since the start of the war. Their trip also shows how Russia transferred some of the hundreds of Ukrainian prisoners it says it holds on Russian territory.

Since the start of the war on February 24, Ukraine and Russia have accused each other of violating the Geneva Conventions which cover the protection of civilians during war and the treatment of prisoners of war.

In March, Russia’s human rights ombudsman said she had heard of cases of “cruel and inhumane treatment” of Russian POWs in Ukraine.

This month, Ukraine’s human rights ombudsman said returning prisoners of war had described ill-treatment while in captivity in Russia, including being locked in basements, deprived of food and forced to undress. Read more

Authorities on both sides have repeatedly stated that they respect international humanitarian law in terms of the treatment of prisoners.

Speaking at the Dymer plant, Khropun described what happened when he was first arrested by Russian forces, after leading evacuees to a checkpoint on March 18.

“They arrested me, closed my eyes – as in, they put a hat over my eyes, tied it with tape – then wrapped my hands in duct tape, like a terrorist. Then I was transferred here,” said Khropun, 44. .

“There was always hope with God that I would come (home) back,” said Ivannikova-Katsemon, who has children, sometimes pausing to calm her voice or hold back tears. “The hardest part was not being able to tell my family and friends that I was alive and in captivity.”

‘THE NIGHTMARE COMES TO LIFE’

The two said they were held in an unheated room in Dymer’s small factory, huddled on thin mattresses and scraps of cardboard. About 40 inmates were crammed into the space, sharing a plastic potty as a toilet.

“It was like a nightmare come true,” Khropun said, speaking to Reuters from the room where he was being held.

He gestured to the dirty mattress he shared with several others. The floor was strewn with rubbish, empty Russian army ration boxes, zip ties and loops of duct tape that they said had tied people’s hands.

Ivannikova-Katsemon described how she was able to slightly loosen the binding around her wrists with a safety pin which she kept on hand throughout her captivity by hiding it inside her hair elastic.

The Russians brought food once or twice a day, mostly army biscuits and the occasional pot of ready meals. There were only two plastic spoons, so some people ate with their hands, others with scraps of paper, Khropun said.

One of the spoons was still stuck in a pot half full of what looked like rotten cabbage stew.

A bullet hole was visible in the concrete ceiling of the room. One of the guards had fired in the air to scare them, they said.

After nearly a week, Khropun and Ivannikova-Katsemon said they and about 14 other detainees were loaded into a military truck. They weren’t told where they were going, but the non-stop journey through Belarus would eventually land them in official detention centers in Russia.

In Belarus, they said they were interrogated by the Russian military. They each received a document containing their photo, date of birth, height, hair color and other identifying details designating them as “a person who opposed the special military operation” – the Russian term for its war in Ukraine.

They showed Reuters copies of the documents, titled “Certificate of Identity” and issued by the Russian armed forces.

“The first step was being stripped naked, photographed, noting scars, I have a few. Then pouring water (on me) and getting beaten,” Ivannikova-Katsemon said. The document she received lists her scars in a section titled “Other Features”.

Once in Russia, the two said they went through several different detention centers. At one point, Ivannikova-Katsemon said she was told she would be sent to work in a logging camp in Russia’s far east.

“I don’t know the place, they just said: Siberia,” she recalls.

Khropun said he was subjected to multiple interrogations in Ukraine, Belarus and Russia, sometimes being forced to kneel for long periods in cold storage or beaten on the knees or ribs.

He said young prisoners were targeted for particularly harsh beatings by guards, who also shaved captives’ heads and beards, sometimes leaving a tuft or half mustache as a form of humiliation.

He said he tried to maintain the morale of his fellow prisoners, who he said were also Ukrainian civilians. “I would say ‘guys, we’ll all be back 100%. There’s just one small question: when?'”

On April 8, the two men said they had been returned to the clothes they wore when they were first detained, still dirty from days spent in the factory.

Handcuffed, they were flown to Crimea from where they were taken by truck to Ukrainian-controlled territory on 9 April.

After about three weeks in captivity, they were home.

“Of course there was a feeling of joy, but it was kind of hard to fully comprehend,” Khropun said.

Khropun and Ivannikova-Katsemon said they were the only ones exchanged from the group of detainees who were sent from Dymer to Russia. They described their fears for the others who they say are still being held in Russia.

Ukrainian authorities confirmed that 26 prisoners were exchanged with Russia on April 9, but did not name them all. The office of Deputy Prime Minister Iryna Vereshchuk, responsible for negotiating the exchanges, did not respond to a request for comment on the release of Khropun and Ivannikova-Katsemon.

On April 11, Vereshchuk said a total of some 1,700 Ukrainian soldiers and civilians were being held in Russia and by pro-Russian separatists in the east of the country. Read more

Ukraine held about 600 Russian military prisoners of war and no civilians as of April 4, according to Vereshchuk.

Russia does not publish exact figures, but in late March its human rights ombudsman said there were more than 500 Ukrainian prisoners of war in Russia.

Ivannikova-Katsemon said she wore a medical corset and took medication to manage the pain she is experiencing following her treatment in captivity.

“But these monsters, who call themselves liberators, haven’t broken me,” she said, standing in the spring sunshine outside the Dymer factory.