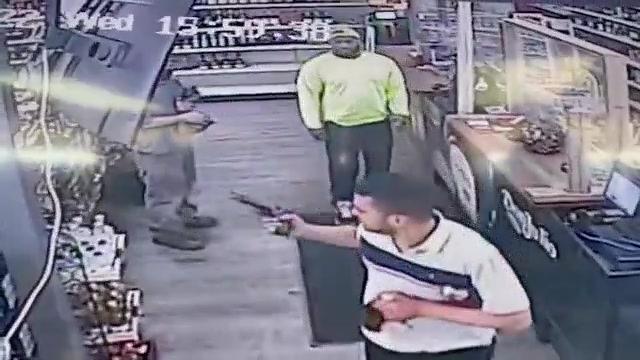 AURORA, Colo. (KDVR) — Two victims of a violent crime spree on Wednesday that involved a man suspected of a fatal shooting at an Aurora church spoke to FOX31 about their experiences.

“Since then, I have been nauseous. Her face is there all the time,” Tiffany Randon said.

“I was going south on Parker Road. I was going to go back on 225 to hit the gym on Colfax,” Randon said. Villa tried to get into other vehicles, Randon said, eventually arriving at his.

Fleeing from the police and determined to find his next getaway car, Villa took a cheeky step.

“He pulled up his shirt and he pointed the gun at me and put it on the window to my head. It’s a sound I think you’ll never forget,” Randon said.

Earlier today, Antonio Barajas Gomez said he was near a liquor store as Villa drove off, bravely blocking Villa’s car with his truck.

Barajas said when Villa realized he couldn’t pass his truck, he got out of his car and drove straight towards it.

It is after having robbed a liquor store, then Randon’s car, that Villa will meet his fate: shot by the police.

Report: Denver housing is more unaffordable for the middle class than almost any US metro

This experience left Randon and Barajas with emotional trauma.

“Raped, mad, scared. I was pretty shaken up, I was shaken up,” Randon said.

For Barajas, it left him thinking about what would lead to a youngster losing his life for who knows what. After overcoming his trauma, Randon said he discovered feelings of gratitude towards the police.

“Shout out to APD. I appreciate yesterday. Chief Wilson should be proud – they took care of me,” Randon said.

In addition to their frightening experiences, another challenge: Randon and Barajas said they had no vehicles since they were seized as evidence in this case.