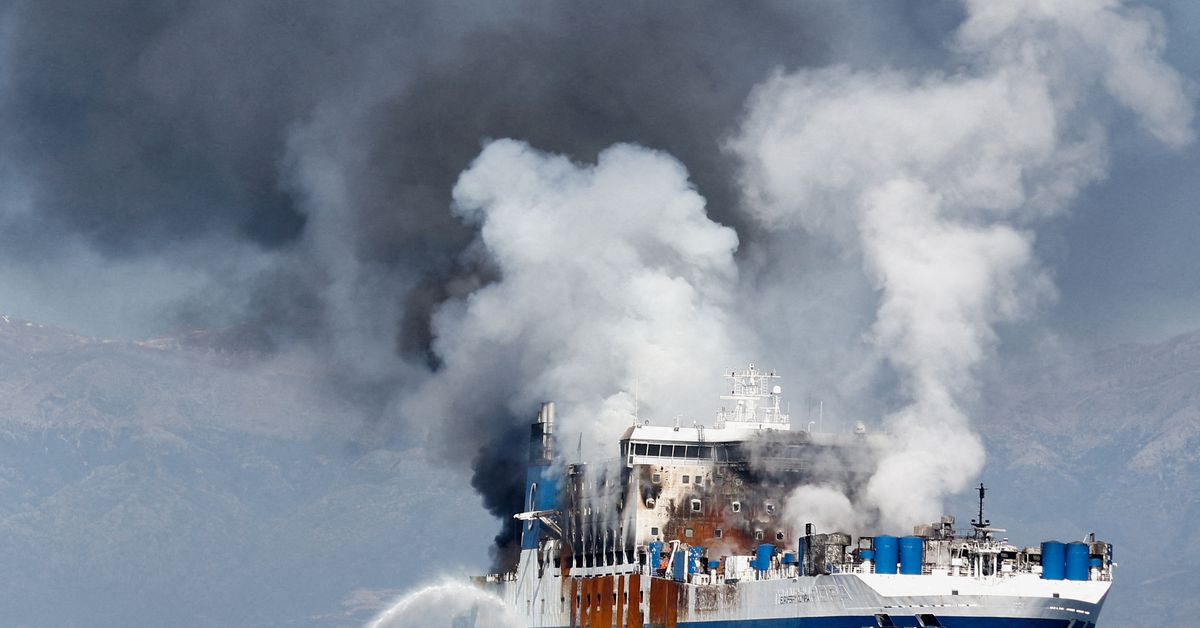 Smoke rises from the Italian-flagged Euroferry Olympia, which sailed from Greece to Italy early on Friday and caught fire, off Corfu, Greece, February 19, 2022. REUTERS/Guglielmo Mangiapane

CORFU, Greece, Feb 19 (Reuters) – Shocked and sleep deprived passengers rescued from a Greek-Italian ferry that caught fire off the island of Corfu said on Saturday they felt relieved to be alive, although some feared for their livelihoods after losing trucks and cargo.

More than 24 hours after the blaze broke out early on Friday, rescue teams were still searching for 12 missing people, some of them trapped inside the ship, as firefighters struggled to tame the flames on the ship a few miles offshore from Corfu.

“We saw death before us,” Danilo Carlucci told Reuters at a hotel in Corfu, where dozens of rescued passengers, including families with children and babies, were taken to safety.

Many of the ship’s passengers, including Carlucci, were truck owners or drivers transporting goods, from plastic cups to carpets, between Greece and Italy or other European countries.

The nine-hour trip from Igoumenitsa, a port in Western Greece, to the Italian port of Brindisi was part of their weekly routine.

Truck owner Massimo Averna said he was asleep when crew members came knocking on his cabin door at 04:00 (02:00 GMT), shouting at passengers to abandon ship.

“We got dressed and immediately crossed the deck,” Averna said, adding that when they got to the deck they saw crew members trying to put out the fire.

Averna had taken the ferry for the first time since buying a new 200,000 euro truck to transport thermal pellets from Athens to Italy. He had a photo of it on his cell phone.

British passenger David Waller, 58, said he left all his belongings behind as he rushed to the lifeboats in the dark.

“I didn’t know what was going on, you were on a boat…it was dark so you didn’t know where you were…It was terrifying,” Waller said.

Valentino Turlakov, 16, said it was “a really scary night that I will never forget in my life”.

Many of the 280 rescued passengers said they hoped rescuers would be able to bring the 12 missing passengers from Bulgaria, Greece, Turkey and Lithuania to safety.