Witnesses tell of the horrific massacre of a church in Nigeria 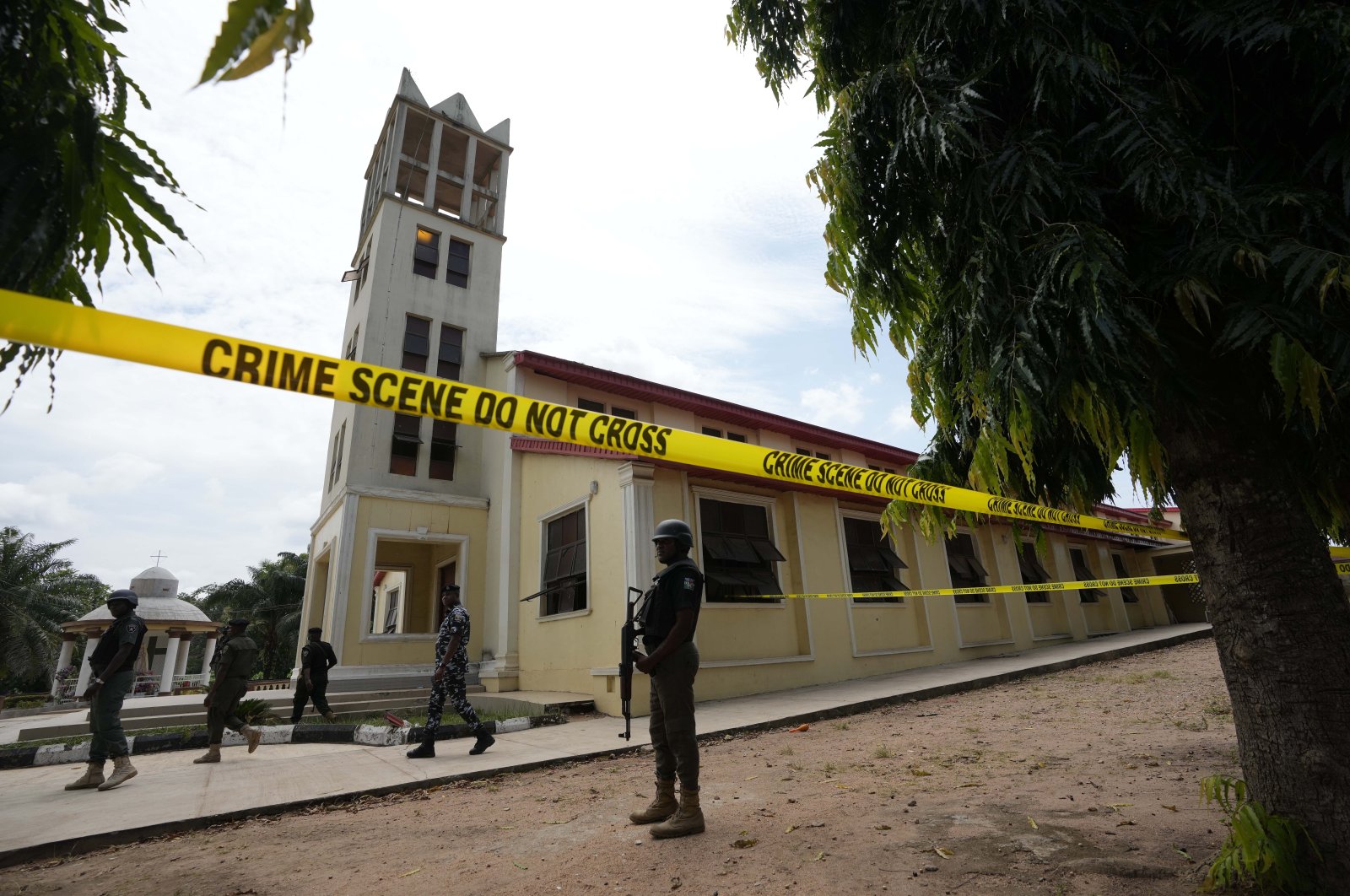 Streaks of blood on the floors and walls, sandals abandoned in a desperate race to escape, a leafy Bible lying among shards of glass.

These are some of the disturbing sights inside St. Francis Catholic Church in the Nigerian town of Owo after unknown assailants attacked the congregation with guns and explosives during Sunday mass, killing and injuring dozens of people.

“All of a sudden, as the mass was about to end, we heard two gunshots near this side, so everyone started running,” Francis Obi said. speaking outside the church the day after the massacre.

He imitated the sound of continuous gunfire to describe how the attack escalated and recounted how he ran to a toilet where he fell to the ground in terror.

“I started scratching (crawling) until I got to the bottom of the toilet,” he said. He then noticed a gap between the wall and the ceiling.

“I put a leg there, then I fell on the other side. That’s how I escaped,” he says.

The horrific scene in the church bears witness to the intensity of the violence.

Streaks of blood on the floor and bloody fingerprints on the walls suggest the injured tried to drag themselves to safety.

Wooden furniture, including a desk and a bench, had been shattered into pieces that lay on the floor amid plaster debris.

Sandals, newspapers and an umbrella were among the bloodstained personal items left on the floor. A hymnal and a Bible were littered with rubble and broken glass.

On Monday, officers placed yellow tape at the crime scene outside the church, but there was little sign of an ongoing forensic investigation.

The gunmen opened fire on worshipers inside and outside the building in a coordinated attack before escaping, authorities and witnesses said Monday.

Although Nigerian security forces have yet to identify the perpetrators of Sunday’s attack on St. Francis Church in the town of Owo in the relatively peaceful Ondo state, analysts have suggested that They came from elsewhere in this West African country, plagued by violence from various armed groups. , kidnappers and extremists.

No one has claimed responsibility for the church killings, in which children were among the dead and the gunmen used some kind of explosive. Dozens of people were injured, although an exact number was not released by overwhelmed hospital staff.

“The attack is undoubtedly terrorist in nature, and the scale and brutality suggest it was carefully planned rather than impulsive,” said Eric Humphery-Smith, senior Africa analyst at the firm. Verisk Maplecroft Risk Intelligence.

State Police Commissioner Oyeyemi Oyediran said security forces, including the military, pursued the attackers, “but unfortunately we were unable to catch them”.

Nigeria, which is Africa’s most populous country with 206 million people, has been grappling for more than a decade with an insurgency in the northeast by extremist Boko Haram rebels and Daesh-affiliated militants. in the province of West Africa. The extremists, who have killed more than 35,000 people according to a UN tally, are fighting to establish Sharia law and to stop Western education.

Ondo, however, has long been considered one of the safest states in the country.

Sunday Adewale, who works in the local chief’s palace, said the gunmen had used the element of surprise to their advantage.

“Everyone felt relaxed and went to church,” he said. “Within 30 minutes they did what they wanted and left.”

The attack came as worshipers celebrated the Feast of Pentecost, an important Catholic holiday after Easter. Bishop Jude Arogundade said some gunmen entered the church while others stayed outside to shoot anyone who ran away.

Steven Omotayo, who lives nearby, heard the gunshots and rushed to the scene.

“I saw a lot of dead bodies – young and old, even children,” he said. “People came in and started shooting from the door.”

He said the church had three entrances and the main entrance would have been locked making it difficult for many to escape.

“They were just shooting. If they see someone trying to escape or get up, they’ll shoot the person,” he said. “Everyone standing was pelted with bullets.”

Reverend Vincent Anadi, who was absent from his church at the time, said the gunmen also set off some sort of explosive or grenade.

He said he was returning to the church when he saw people chaotically fleeing, including two altar servers he knew.

Many Nigerians have expressed shock and anger over the attack in Owo, a small town of traders and government workers located 50 kilometers (31 miles) from the Ondo state capital, Akure . The central location of the church has raised questions about how the gunmen got there unnoticed.

Rahaman Yusuf said many people tried to find out the whereabouts of their loved ones after the attack. “Some came only to find they were dead,” he said, adding that they also went to hospitals to see if their relatives were among the injured.

Federal Medical Center workers in Owo struggled to treat dozens of people injured in the attack. The Medical Association of Nigeria has asked all available doctors in the area to help.

Some of the injured were in “very bad condition” and needed surgery, according to a doctor who spoke on condition of anonymity because he was not authorized to speak to reporters.

“I treated a good number of injured people, but what I saw yesterday was far beyond anything I’ve seen before in my life,” the doctor said. “This calamity has hit all age groups, from toddlers to older ones.”

Blood stocks at the hospital ran out and an appeal was launched, the doctor added.

Mahamat Saleh Annadif, head of the United Nations Office for West Africa and the Sahel, described the incident as a “barbaric terrorist attack” and said he hoped that “the perpetrators of this horrible terrorist act against a church will be quickly apprehended and brought to justice.” .”