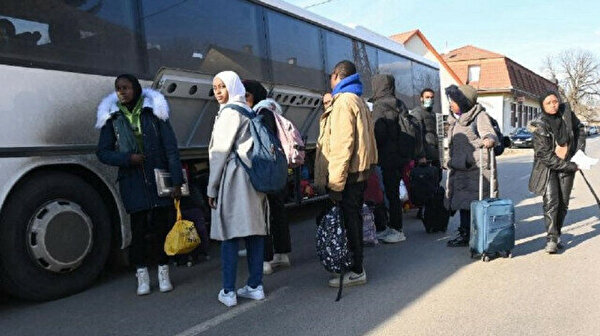 It took Ahmed Ali 18 hours to cross the Ukrainian border into Poland on a tiring journey to escape Russia’s war on the European country.

“The situation at Ukraine’s border gates with Poland is incredibly tense and overcrowded,” Ali told Anadolu Agency on Tuesday.

“We had to walk 20 to 30 km to reach an extremely crowded gas station. There were people of all nationalities except Ukrainians.

There is no official estimate of the number of Yemeni nationals in Ukraine.

Last week, Yemeni authorities said they had evacuated 18 Ukrainian nationals via Poland, while four others were evacuated via Romania.

tiring journey
Ali said he had to wait until 6 p.m. to get the entry stamp to Poland.

“I was the first to cross, but my friends stayed and waited in line for another 17 hours,” he said. “It was a very strenuous and exhausting journey, both physically and mentally.”

The Yemeni student, however, said: “The opposite of this treatment was in Poland, where we and other refugees were treated with respect and appreciation.”

According to the United Nations High Commissioner for Refugees, around 1.5 million refugees have fled Ukraine since the start of the Russian war against Ukraine.

The Yemeni consul in Warsaw, Khaled Alkathery, said the Yemeni embassy in the Polish capital facilitated the entry of 30 Yemeni students into the country.

However, he acknowledged that many other people had entered the country without informing the embassy.

“There were no children among the evacuees,” he said, adding that seven Yemeni girls were among those evacuated from Ukraine.

The Yemeni diplomat praised Polish cooperation with the embassy to facilitate procedures for Yemeni evacuees from Ukraine.

“Some students contacted us while in shelters, and we assured them of the importance of staying in shelters and safe places until safe passages were provided for civilians,” he said. -he declares.

Alkathery said priority is given at Ukraine’s 12 crossing points with Poland to Ukrainian nationals, children and women.
“No NGO or diplomat is allowed to reach the other side of the border,” he added.

Racism
Ibrahim Saleh, a 24-year-old student, complained about racism and discrimination at the Ukrainian border.

“There were acts of discrimination. Ukrainians passed us easily in comfortable buses, eating and drinking, while we were in the cold without food or drink,” he said.

While hundreds of refugees were stuck in Ukraine, a small group of Yemeni and foreign volunteers in Poland began working to help Yemeni students seeking to flee Ukraine.

Azal AlSalafi, one of the campaign’s main organizers, said volunteers had located more than 150 Yemeni students in Ukraine and helped many cross into Poland and Hungary.

He said volunteers provided accommodation for 89 students in Poland and other EU countries using their own money.

Al-Salafi said two Yemeni students and an Egyptian in Kharkiv, northeastern Ukraine, were hospitalized after being brutally beaten by a Ukrainian border guard as they exited Medyka.

“They are now out and safe, but the level of racism and violence against minorities and Yemenis in Ukraine is heartbreaking,” she said.