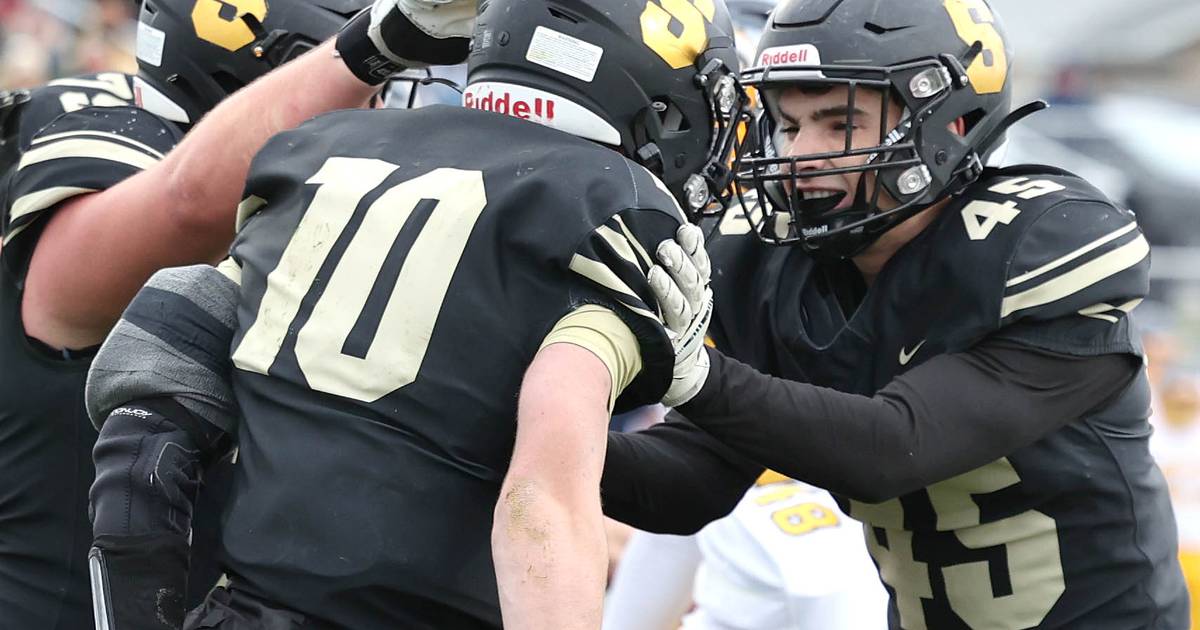 SYCOMORE — Zach Crawford flew through the air on the final play of the first half, hoping Sterling quarterback JP Schilling would throw the ball.

Instead, Schilling tucked the ball in and Crawford landed on him for a sack on a play he said his friends dubbed “the spider monkey” – one of two sacks the Sycamore eldest had Saturday to go with two rushing touchdowns in the Spartans’ 28. -0 victory over the Golden Warriors in the Class 5A quarter-finals.

“I was kind of hoping he would throw it so I could get my interception,” Crawford said. “I was in the air, I realized he wasn’t going to throw it, so I was like, ‘Well, looks like I’m falling on him. Friends called it the bag of the spider monkey. So that’s what we’re going with.

This victory sends the Spartans (12-0) to the semi-finals for a second consecutive year. Last year, the team lost to eventual state champion Fenwick. This time they will face Nazareth Academy (8-4) in Sycamore for a trip to the state championship game.

Crawford said this time around was unfinished business.

“Last year we didn’t finish the semis the way we wanted,” Crawford said. “It’s about earning our respect. It’s about finishing what we couldn’t do last year.

Trailing 14-0 at halftime, Sterling (9-3) started the second half with the ball. The Golden Warriors have rotated quarterbacks Schilling and Kael Ryan all year, but on this run, both were on the field. Schilling found Ryan on a screen which Ryan turned into a 20-yard gain, then a personal foul on Sycamore at the end added 15 yards into Sycamore’s red zone.

The Golden Warriors reached the 10, but a bad snap backed them 14, then on the long and fourth, Burke Gautcher intercepted Ryan, ending Sterling’s best scoring chance of the day.

“It’s something we’ve done for the past two weeks and something we’ve always known we had,” Sterling coach Jon Schlemmer said of playing both quarterbacks at the same time. . “They both start in defense. They are two of the best players we have ever had in this program. So we knew we had to get them into the field at the same time later. But credit to Sycamore, they had an answer for everything we wanted to do today.

Sycamore ran nearly 6 minutes on the next ride. With all the big plays Crawford had in the game, Sycamore coach Joe Ryan said none was bigger than an 18-yard rush on fourth-and-1 of 19 on that drive. , getting the first down and keeping the ride alive for a Tyler. Curtis’ touchdown run on the next play for a 21-0 lead.

Sterling’s offense couldn’t do much until the final practice of the game in the final 2:44, and they were down 28-0 by then thanks to a 6-yard run from Crawford with 9:44 to go in the fourth.

Sterling’s last drive started at his own 5 and reached the Sycamore 20, but Curtis offered an interception to preserve the shutout, the Spartans’ second in a row, fourth in the last five games (all against playoff teams), and sixth of the year.

“The shutouts are incredible. Their offense scored a lot of points,” said Joe Ryan. “To hold these guys and hold these quarterbacks running so well, our kids just tackled well and played well. And that’s what you need to do this time of year.

Sycamore scored on his first drive, turning a few big early runs from Joey Puleo into a 5-yard touchdown by Crawford.

From there, the defense took over. Sterling’s best scoring chance came when Sycamore slipped a snap and took over at the Spartans 29-yard line. Facing a fourth and a 3, Kael Ryan took off and had a way to the first down, but Kiefer Taronki took him one yard from the marker.

It wasn’t until half time was over that the Spartans added a score. The Spartans went for a third and a goal from 8, Meier ran through the middle intact for the score and a 14-0 lead.

Sterling’s two quarterbacks were a combined 12 for 22 for 101 yards and three interceptions, including one by Dawson Alexander. Sterling rushed for just 64 yards in the game on 35 carries. Kael Ryan led the Golden Warriors with 38 yards on 14 carries, and was 7 of 15 passes for 56 yards and all three picks.

For the Golden Warriors, their season ends with losses only to St. Francis (still alive in the Class 4A semifinals), Moline (reached the second round of the 7A playoffs) and the Spartans.

“It’s been a good year,” Schlemmer said. “We lost against three very good teams. We have to find a way to beat those really good times. We have to improve, myself included. It was never for lack of effort with our children. Our children played their cue.