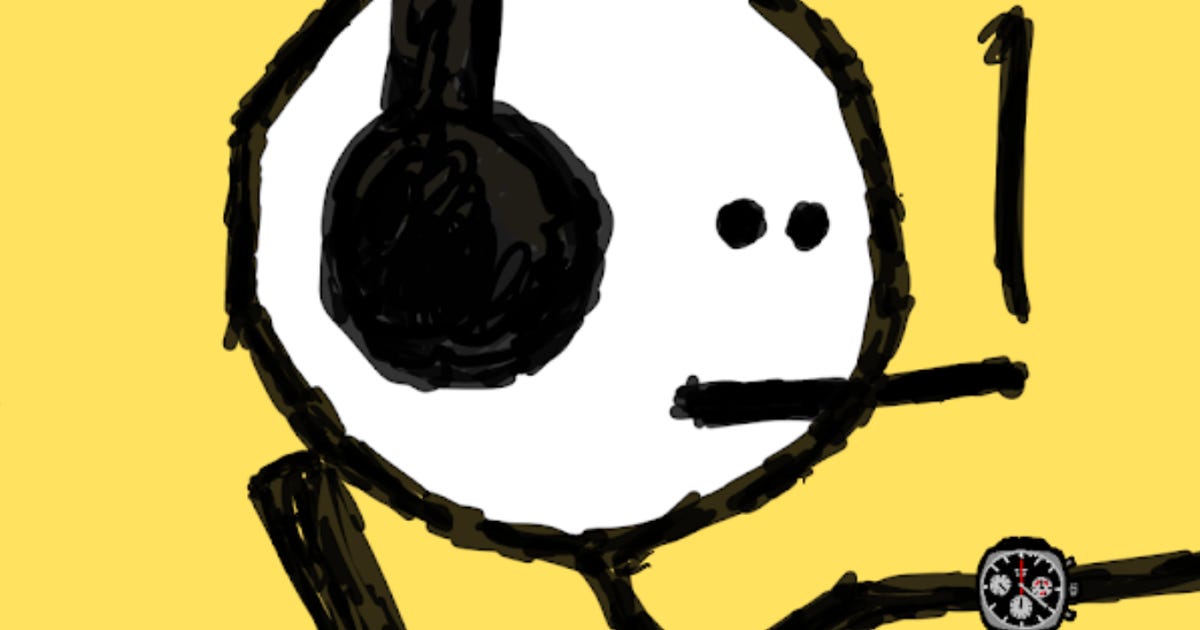 NFTs are confusing at the best of times because people who spend five figures on profile picture art are never easy to figure out. Yet the most successful non-fungible token (NFT) collections have consistent logic. Crypto rich are dropping six figures on CryptoPunks as they have historic value as the very first NFT collection. They spend even more on Bored Ape Yacht Club NFT because it’s become a big enough brand for people like Adidas and Rolling Stone to work with. But even if you consider yourself open-minded when it comes to NFTs, you may find it difficult to accept “mfers”.

Like the popular collections mentioned above, mfers is a set of around 10,000 NFTs (10,021 to be precise). Each artwork in the collection is a stick figure wearing headphones typing on an out-of-frame keyboard. Since its launch on Nov. 30, more than $110 million worth of mfers have been bought and sold by NFT traders, more than most Hollywood movies make in box office sales.

If you want to get your hands on one, the cheapest mfer listed on the OpenSea NFT market is 3.97 ether. That’s a few dollars less than $14,000.

Even when you take into account the crypto-rich backgrounds of most NFT traders – dropping 3 ether on fun jpeg is easier if you bought ether for $40 instead of $4000 – mfers success is unusual. Dozens of NFT projects are launched every day. Many are scams, more are grabs, and most of those that attempt to be legit fail quickly. A tiny fraction reaches the heights that mfers has reached over the past four months. It is ranked 44 on the OpenSea chart for all-time volume.

And it’s absurd. Mfers is everything people hate about NFTs: simple art sold at outrageously high prices. Like many success stories in the cryptosphere, however, it’s more complicated.

The underlying meme art of mfers is, hilariously, an argument over intellectual property. It is one of the few “CC0” NFT collections, which means it is in the public domain. Its creator does not own the images, and people are free to use the mfer brand for anything they want. The idea is that mfer owners will benefit from the growth of the mfer brand, even if no one owns the copyright. Essentially, this is an experiment to see if it’s possible to create a fully crowdsourced brand.

“I do painting and ‘real’ art myself and it was never the idea to do a Mona Lisa here,” Sartoshi told me via Twitter DMs. Like most people in the Web3 world, he asked to remain anonymous. “The idea was to make a cool NFT with a sketchy feel that people could relate to…and release the copyright on the art to see what the universe decided to do with it.”

The collection was dripping with internet meme culture from the start. Launched on November 30, the public sale began at 4:20 p.m. with a price set at 0.069 ether ($230) per mfer. All 10,000 copies sold out instantly thanks in large part to Sartoshi’s followers.

As often happens in the NFT market, mfers had a day or two in the spotlight, then faded as that shine moved on to the next eye-catching project. At the end of December, sales slowed and the floor price (the cheapest someone had quoted on the market) fell to 0.05 ether, below the public sale price. The Mfers started to recover in January and then exploded in February. Once the momentum started to build – NFT collections sell largely on hype, so the momentum is especially strong – buyers poured in, pushing the price floor up to 6 ether ( $18,000). Like all collections, mfers have different characteristics that make some rarer than others: a trader dropped 80 ethers, a whopping $270,000, on this rare mfer.

The price floor has since balanced between 2.5 and 4 ethers. This still doesn’t make mfers a “blue chip” NFT, which usually refers to a handful of collections that can sustain a price floor of more than 10 ethers, but it does make mfers much better than 99% of collections.

Sartoshi thinks mfers was able to stand out by avoiding the hype that accompanies most NFT launches. With stick designs, no one could claim the art was groundbreaking, as many NFT creators breathlessly claim the art in their collection is.

“Most NFT collections have pretty basic artwork,” Sartoshi said, “but all these people spend money on them and all of a sudden they stumble across their desks saying ‘omg the art is amazing. I always joked that a lot of them were cereal box characters.”

Like with dogcoin, the silliness of it all was a major draw, spreading in NFT circles like a good meme goes viral on Twitter. Yet the collection’s success can also be attributed to its approach to intellectual property – a phrase that seems absurd to write. That Sartoshi made a public domain collection makes it unusual. Some creators, like CryptoPunks’ Larva Labs, reserve the rights to all intellectual property in the collection. Others, like Bored Ape Yacht Club’s Yuga Labs, only give rights to owners, and even then only to the specific NFT they own. (Yuga Labs bought CryptoPunks from Larva Labs last month and said it would extend the same copyrights to CryptoPunks holders that Bored Ape Yacht Club owners have. The fact that a company can buy the IP for another NFT collection is another argument some make in favor of CC0 collections like mfers, which are not purchased the same way.)

“Instead of just decentralizing the rails on which NFTs operate, you extend that to NFTs,” says Giancarlo Chuax, a former stock market analyst who now runs a YouTube channel analyzing NFTs. “Compare that to a Bored Ape Yacht Club, where you have a centralized figure that controls the brand. CC0 [public domain] projects don’t have that. Anyone can take the brand in any direction they want, and some believe that’s more true of what the internet is.”

In an industry where people really care about decentralization, it’s an idea that mfers have clung to – even as they acknowledge, as some did during a Twitter space I was invited to join, that it can be end in chaotic failure.

Sartoshi took a completely hands-off approach, approving of the community from afar rather than actively participating, let alone leading it. Mfer holders actively set out to build the brand, often using their 9 to 5 skills to do so. Several have designed and produced merchandise. One of the mods in the community, MasterChanX, runs MferRadio, an online radio station that, among other programs, hosts a Shark Tank-style show evaluating ideas for collections derived from mfers like 3D Mfers. One of the incumbents, Richard Chiu, has experience in acting and producing in Hollywood, as well as making an mfer movie. Someone even paid out of pocket to put mfers in Times Square.

“The statistical rating [of success] are higher when you have unlimited creation,” one holder told me.

As frivolous as mfers seem, Chaux says collections like this could dramatically change the way people view intellectual property. “The idea of ​​something grassroots, bubbling organically without the traditional incentive to own the copyright to that imagery, [would be] quite revolutionary,” says Chaux. “There are a few interesting examples that have worked well, Cryptoadz, Nouns, mfers, but they’re all pretty new. This experience dates back at most a few months.

Sartoshi himself speculated that the combination of NFT technology and public domain IP could be powerful, but for him that’s not the main draw of mfers.

“What’s the use? Well, you can build whatever you want with it. But at the same time, I would also ask, what’s the use of a Mickey Mantle rookie card?” he said, referring to a baseball card that recently sold for $5.2 million.

“Answer: they’re adorable. I think some might also say moms are adorable.”

Become a home entertainment expert with our handpicked tips, reviews and deals. Delivered on Wednesday.